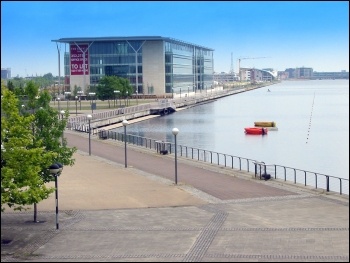 The workers had seen their pay cut following the implementation of 'single status' - a national agreement signed by local government trade unions back in 1997 which allow local councils to attack pay and conditions. The Socialist Party correctly warned at the time that without funding from national government, local councils would pay for equal pay by simply robbing other sections of the council workforce, which is exactly what has happened since.

In Newham, the Unite branch is now using industrial action to win grading claims, rather than only relying on the job evaluation process.

This is now the third grading campaign success for the union branch, which is sending a clear message that they will not simply walk away when the employer refuses to act fairly. Instead, the members will be given the option of industrial action. The result has been a backdated increase in the grade along with a significant lump sum to settle the dispute.

This follows the strike victory at Hackney passenger services, which was also linked to single status. There, enhancements for working split shifts had previously been taken away as part of local implementation of the single status agreement.

Both campaigns show the way forward. It is possible to reverse previous losses but only by being prepared to take strike action. The task now for the unions is to raise the demand in council after council and to link these up as part of a co-ordinated national campaign.