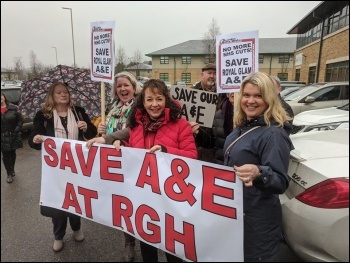 There has been a huge response to the announcement of the closure of the A&E at the Royal Glamorgan hospital. 200 people lobbied the Cwm Taf health board at short notice. And meetings have been held all across Rhondda Cynon Taff.

There's an angry mood of opposition. People living in the Rhondda valley especially, face long journeys to hospitals in Bridgend or Merthyr.

Most reserve their anger for the Welsh Labour government. Its plan, the South Wales Programme, was always to close Royal Glam's A&E. Most suspect that the department has been run down deliberately. The Welsh government has been carrying out NHS cuts on behalf of the Tory government in Westminster.

The Welsh government says that it doesn't matter that patients will have to travel long distances in an ambulance. But the ambulance service is struggling already, with five-hour waits common. And people visiting sick relatives will have to catch two or three buses each way, taking hours of travel time.

The health board claims that it has no choice but to close the A&E, because it cannot recruit consultants to staff the department. But its medical director admits that the plan to close the A&E has unsurprisingly made it difficult to attract potential consultants!

The Welsh government must immediately step in with a plan to invest in training and recruitment of consultants across Wales, and with an emergency plan to save Royal Glamorgan A&E.

At the Socialist Party campaign stall on this issue in Pontypridd, people were furious at the plans. 82 people bought a copy of the Socialist.