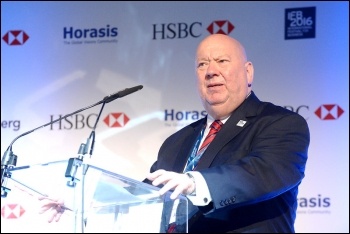 Over the past decade Anderson has been happy enough to pass on cuts totalling £436 million, devastating services in the city, and plans another £30 million cuts in the budget currently being prepared for 2020-21.

However, having won the general election with an overall majority, the Tories have rejigged the funding formula for local government, ironically termed the "Fair Funding Review". It's directed at forcing further cuts on hard-hit urban areas, many of which were part of the 'Brexit revolt' during the general election, returning Tory MPs for the first time. It appears that a further £27 million will be cut from Liverpool, and this has enraged Anderson.

However, examining his statements carefully, there is a wide gap between the headlines and the small print. In fact, on 31 January, Anderson was asked directly by Roger Phillips, the host of BBC Radio Merseyside's weekday phone-in programme: "You are not going to be doing a Derek Hatton then?" [Derek was deputy leader of Liverpool's socialist council in the mid-1980s] Anderson replied: "No, we are not going to be setting an illegal budget, I promise you."

Anderson went on to say that the government would have to send people up to make the cuts themselves!

In other words, what Anderson is really doing is little more than empty sabre rattling, deliberately grabbing headlines in advance of the mayoral election in May, with no realistic intention of stopping the cuts.

This charade illustrates the need for a proper challenge to the Tory attacks on Liverpool. The city needs a Mayor who is prepared to use council reserves to balance a budget, working alongside the local authority trade unions, the Merseyside trade unions generally, and working-class people on the city's housing estates, organising demonstrations, strikes and political pressure to force the necessary funding out of the Tory government.

Taking the real 'Liverpool road' is spelt out in Peter Taaffe's and the late Tony Mulhearn's classic book 'Liverpool - A city that dared to fight', chronicling the successful Militant-led struggle against Thatcher's cuts in the 1980s.