I sold 13 copies of the Socialist across three campaign activities on 29 January.

This shows how important it is for Socialist sellers to always carry copies of the latest paper with them. That way you can keep an eye open for more opportunities to spread our ideas.

In the morning, we sold the Socialist outside the main council office. We started selling the Socialist there when the paper marked issue 1000 in 2018.

Sales go up and down depending on the mood and what's on the front page, but also whether our regular buyers are working from home or on annual leave. Consistently selling here has helped the Socialist Party stay in contact with an important workforce in the city as well as union activists.

That evening we also heard about a rally for Rebecca Long-Bailey's Labour leadership campaign. Outside the venue we sold papers to those attending the rally.

Another person, who was just passing, bought a paper. They'd already read one of our articles online. See 'Protesting is not terrorism' at socialistparty.org.uk.

Later at the trade union council, where Socialist Party members play a leading role, we sold a further five copies, including one to a shop steward we hadn't earlier met in the day at the council office.

Four of these copies were also sold at solidarity price. If you buy the Socialist for £2 or more, you can help the Socialist Party to raise fighting fund to support our campaign activities. 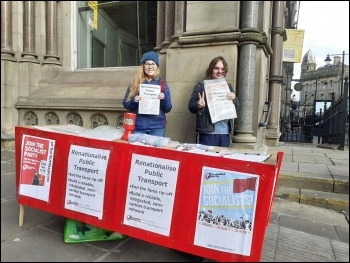 Canterbury: It's an NHS, pay and housing crisis for the working class

From across Kent, Socialist Party members were out in Canterbury. We met more angry people who see nothing will improve with the Tories. They were keen to give us their support.

The NHS crisis means it's difficult to see a GP. The housing crisis, high rents and low pay make paying the bills hard. A young family with three children told us they need three jobs to survive.

We sold eleven Socialist papers. After the stall, we had a good discussion and made plans for more campaigning, meetings and preparation for our national congress.

Waltham Forest, London: Our stall was so busy, you couldn't see us!

So many people at our Saturday campaign stall in Walthamstow you couldn't see it! We called for council housing and rent control.

It's such a massive issue. Even well-paid professionals are sofa surfing and in housing need.

34 people bought the Socialist and we raised £37 on top for the fighting fund.

Hackney, London: People agree: It's a weak government that can be beaten by strikes

Most people in Hackney agreed that this isn't a strong government. When I mentioned about strike action to defend the NHS, everyone agreed.

Across two stalls we sold 19 Socialist papers and raised £24. A retired bus driver came back to buy the paper for the second week in a row. 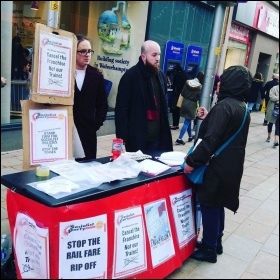 Stevenage: Call the doctor, get the sack

While campaigning to save the NHS in Stevenage, one worker explained how he had phoned his local surgery to make an appointment and was told he was 68th in line! He said he got to 32nd and gave up because his boss would have sacked him.

We sold 23 Socialist papers and raised over £25 fighting fund.