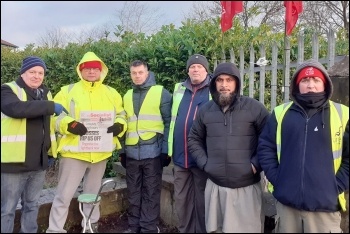 The Westex carpet workers in Yorkshire are now into their 11th week of strike action. The strike is solid and no Unite the Union member has crossed the picket line.

They have won an increased offer of 2.4% after the initial offer was rejected and then withdrawn by management. The revised offer will now go to members to accept or reject.

Unfortunately, as the strike mandate is nearing its end, Unite will be required to reballot. As the timescale is tight, the workforce will have to return to work while the reballot takes place. But the mood on the picket line is strong and they are determined to win.

For the last few weeks a "vacancies, apply within" sign has been added above the company signage near the picket line.

The strikers are receiving support from Unite at the highest level and are mounting a legal challenge to the company over recruiting to replace strikers, which is in breach of employment laws. The company has also already given a pay rise to the existing members of staff who are not in a union.

The union branch was previously inactive but on the back of this strike it now has a new layer of union activists and the branch will be relaunched next month.

Whatever happens, the branch is now better organised for future action. But this also shows that workers are prepared to organise to fight for better pay and conditions, even in workplaces with previously low activity.