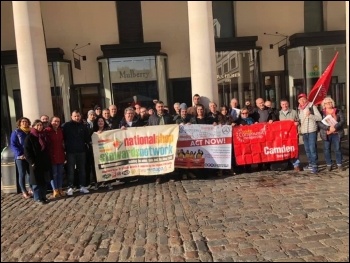 Socialist Party members joined a protest on 8 February called by the campaign Solidarity with the People of Turkey (SPOT - the Socialist Party and the National Shop Stewards Network are both on its committee).

The protest, outside the Mulberry store in Covent Garden, central London, targeted the retailer because it is one of the companies making a profit from the labour of exploited workers in Turkey at the SF Leather factory in Izmir. Women workers have been sacked for the basic right of joining a trade union. Our protest also stood in support of workers at Mulberry in Britain, and against anti-trade union laws here.