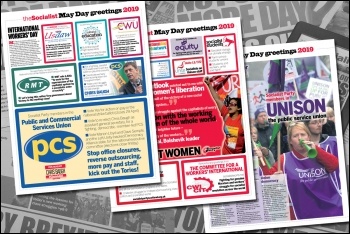 May Day 2019 greetings in the Socialist   (Click to enlarge)

Globally, the capitalist establishment has been rocked by mass popular uprisings. In Britain, the need for organised workers' action against the Tories couldn't be clearer.

Which paper details a fighting industrial strategy to beat the anti-union laws? Who explains how councils can set budgets that defy the Tory cuts? Where can you read about the practical programme needed to reconstitute a mass party for working-class political representation? The Socialist.

We report and discuss strategy for the strikes and struggles the bosses' media slanders or snubs. So celebrate International Workers' Day 2020 by sending May Day greetings to help fund the Socialist.

Socialist sellers and buyers should use a sign-up sheet to ask colleagues for contributions to a workplace greeting. Visit the strikers the Socialist has supported to ask for a greeting as well.

Trade unionists should propose a motion for May Day greetings to their union branch or committee. Make sure you send it now! The deadline for a 20% discount is full payment by 1 April - and the final deadline for greetings is 16 April.

More and more young people have moved into action in the last year. Groups of supportive students in school, college and university should campaign for funds to send a greeting. Community campaigns too, on every issue where the working class is fighting.

But it's crucial that you start now. Select an organiser in your region, trade union group or Socialist Party branch. List who you want to ask for greetings. And schedule the time to campaign for the funds.

In 2019 we broke all the records once more. 123 greetings and almost £8,200 pledged! Any group of workers or campaigners which wants to help fund us is welcome - our minimum price is negotiable if needed.

But the tasks facing socialists and workers are mounting. We must build on our successes again. Let's get those greetings in!