There was lots of interest in the feature in the Socialist on nationalising the railways (see 'Nationalise the railways'). We sold 17 copies, and 14 the week before. 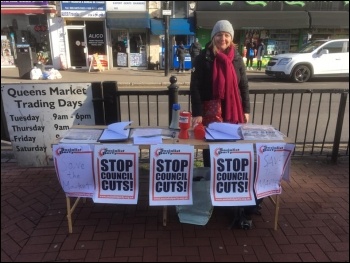 Newham council wants to gentrify the borough and next they're coming for Queen's Market. The Socialist Party was raising the alarm - campaigning at Queen's Market for it to be saved.

The council plans to sell off half the car park. We say no to this big business land grab. People immediately understood that this would be the beginning of the end for the market.

Passers-by were just as angry that the mayor wants another £48 million in cuts. There's nothing left to cut!

Instead of fighting the cuts, Newham council is pushing gentrification - getting rich people in and pushing working-class residents out. We sold ten copies of the Socialist.

We were out in Southampton, fighting for mass council house building. 6,000 households in the city are on the housing waiting list.

Meanwhile, the council is borrowing £200 million to speculate on the housing market. This is enough to build 2,000 council homes.

Exeter: Never give up

We sold eight copies of the Socialist and there were donations of £23 to the fighting fund. One person said: "You people never give up".