Link to this page: https://www.socialistparty.org.uk/articles/30284 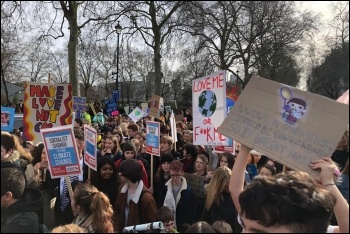 With a slightly smaller turnout then some of the climate strikes, around 1,000 people, the London protest still had a lot of energy, marching off quickly.

There is not agreement about what the movements' demands are and how they can be achieved.

At first, the demonstration marched to the Home Office, but this wasn't actually explained to the majority of students.

On previous protest, students have had to fight for the demonstration to go to Downing Street so students could oppose the prime minister.

Discussions are constantly happening on the demos and in classrooms in between the strikes. Should the movement take more direct action? Should it merely lobby the government? Do we need to challenge the capitalist profit motive with socialist ideas to win?

Socialist Students is clear: a mass movement is necessary, one that challenges the drive by big business for profit at the expense of the environment.

Sadly some unelected stewards didn't agree. They told protesters where to go, without any democratic discussion or debate.

For a year students have been taking action and protesting in Parliament Square. But the structures for democratic discussion in the movement are missing.

Many of the demonstrations have turned into mass student assemblies, about tactics and political demands, thanks to Socialist Students' open mic. But students need the chance to put forward their ideas in between strikes as well.

That's why Socialist Students calls for the building of school students unions. They could democratically organise this movement and give students a voice and space to discuss the next steps.

Despite the anti-democratic actions of the stewards, 34 protesters bought a copy of the Socialist and nine wanted to know more about joining the Socialist Party.