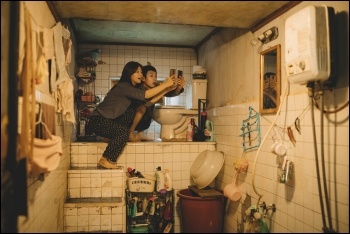 This South Korean film is a brilliant watch, very different from run-of-the-mill Hollywood. It exposes the huge inequality in Korean society, without being clunky.

It's funny, with some impressive performances. You mostly have no idea how it's going to turn out, although the feeling of impending doom builds up as the film progresses. It won't be giving too much away to say that it ends badly for some.

The story begins with the Kim family living in a basement flat, with no money and little food. They have to endure people urinating outside their window and the city fumigators touring the streets. (Dad points out how they can get their flat fumigated for free by leaving the window open.)

They live on the edge of the gig economy. Dad has a record of small business failures. The latest family business is to fold pizza boxes (badly) for a young pizza entrepreneur, but again her business is not far from the edge.

The streets are narrow and chaotic. Everyone is struggling to survive.

By contrast, the Parks are living the high life in a house designed by a famous architect - all breeze blocks and glass, without a comfy chair in the place. Their housekeeper does everything including looking after the children, and they have a driver for the Merc - to take Mr Park to work in his high-tech firm.

During the first part of the film the Kims gradually infiltrate the Parks' life - all getting jobs in various capacities. As they get paid more money they are able to eat proper meals - first in an all-you-can-eat workers' café, where the Kims run through the long catalogue of failed business ventures which have consigned them to a smelly basement.

There the son Ki-woo exclaims "it's a metaphor" at a large plate of food - just in case you hadn't realised the whole thing is about rich and poor, excess and hunger.

As the story unfolds, more and more of Korean society is exposed. The housekeeper reveals the house has an underground bunker where you can shelter from "North Korean missiles, or creditors." Turns out the housekeeper's husband has lived down there for four years, hiding from loan sharks.

Ki-woo has taken the university entrance exams four times and has done military service. Presumably too poor to go to university, he is living in the damp basement with his parents and sister.

As the black clouds gather, the Parks start noticing that the Kims smell the same - like a "damp rag" - and this becomes a symbol of the class difference between them.

Eventually the Parks go on a camping trip, with an outdoor projector, leaving the Kims to raid the cocktail cabinet and muse about them. Mr Kim thinks the Parks are nice, but points out later that "money is like an iron, it smooths out the wrinkles."

Later that night the Kims' basement gets flooded in a storm and their neighbourhood is streaming with raw sewage. As the camera pans along the dark, flooded streets, you see a family paddling along in the rain on a door, with a baby and their possessions - a small, outdated, cathode-ray tube TV, in one of the centres of consumer electronics manufacture.

The Kims end up sleeping in a gym with hundreds of other flooded-out people, while the Parks organise a lavish birthday party for their young son. As the guests turn up in a fleet of posh cars and mill about in the garden, you know it's going to end badly, and you're not disappointed.

There are still a few jokes to come. But you're left thinking about the Kim family, who really care about each other, while the Parks live a fairly vacuous life, occasionally livened up with drink and drugs.

The only solution to inequality which the film identifies is to get a better job. But this is entertainment, not a manifesto. Parasite doesn't pull any punches, and it's definitely worth a watch.

Parasite's director and co-writer, Bong Joon-ho, studied sociology at Yonsei University in Seoul in 1988, where class inequality became a source of interest.

Parallel to characters in the film, he took a job as a tutor to a rich family to pay his way. He was stunned by the difference even between his middle-class background and theirs - they even had a sauna in their home.

The Kims' father finds an article in the paper about several hundred college graduates applying for a security guard job. "This is not an exaggeration," says Bong. "This is actually an article that was published in Korea."

"The poor characters in this film are actually quite smart and capable," he goes on. "You think that with those skills and abilities, they would do pretty well if they had a job, but the issue is, they don't have a job - there is not enough employment for them. And I think that's the economic situation that we face in Korea and also across the world. If we had a proper system set up, they would do perfectly fine."

Bong was once blacklisted by the South Korean government for his left-wing films, but now statues and museums are proposed to be built in his honour! He is a big fan of British filmmaker Ken Loach, listing Kes as one of his top 50 films of all time, but says: "I don't like these social issues coming out of the film like a nail that's protruding out. I want there to be enjoyment."

The Oscars represent the establishment in the film industry, primarily in the US. But growing pressure from below for racial and class representation has pushed the academy to recognise more films like this.

After all, Bong doesn't depict the poor overthrowing the rich on this occasion. The focus is the domestic sphere; reliance on the poor - housekeepers, drivers, home tutors and so on - to ease the home lives of the rich.

So who are the 'parasites' of the title? There are layered interpretations over the course of the film. But despite an initial appearance that it's the poor who are parasites on the wealthy, the film shows that in fact it's the reverse.