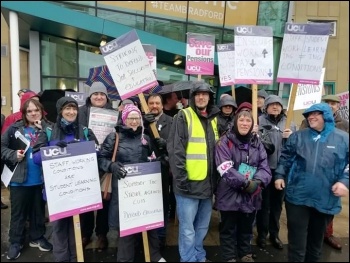 The first wave of strike action in November 2019, involving 48,000 University and College Union (UCU) members in higher education saw some of our strongest ever picket lines.

Combining the two disputes - pay/conditions and pensions - maximised the impact of the action and brought members affected by different aspects of marketisation together under one banner.

The strength of this action is reflected by the 14 institutions that met the anti-union 50% voting turnout threshold in reballots, meaning that they can also now join in this round of action [dates below].

The bold and fighting strategy displayed in last term's eight-days of action (as well as the 2018 pensions strike) has attracted new members to the union, particularly those most exploited by management.

The action, which highlights different aspects of exploitation at universities, has also received wide support from students - many also affected my poor pay and working conditions - with many student unions voting to endorse and support the strikes.

As a result of the action, bosses' organisation UCEA was forced to the negotiating table and has now accepted that pay inequality, workload and casualisation are national as well as local issues. This sets a new precedent and means that we can negotiate on these issues nationally. But we still have a long way to go. The recent offer made by UCEA fell woefully short of any meaningful change from the point of the employer.

Management claim it is unaffordable to increase pay, but university income, surpluses and reserves have all increased. The increased workload, reliance on casualised staff and below-inflation pay rises are all part of the bosses' deliberate strategy to slash staffing costs while increasing 'productivity'.

Winning on pay would provide a lead to workers in other sectors wanting to fight low and stagnant pay. As part of this we call upon the UCU to work with other education unions to call a national education demo.

This should be in defence of education, linking our campaign with students, education unions, parents and school students. Just last week, thousands of National Education Union members were on strike in sixth-form colleges in relation to pay and working conditions.

The general election result puts an increased urgency for an industrial strategy to win. We do not have the backup option of a government that will legislate for improved working conditions or industrial relations. Instead, the election of a Tory majority under Boris Johnson poses a real threat to the right to strike.

The best way of defending against such attacks is generalising the strike action, linking and coordinating solidarity with other trade unions. Particularly the Communication Workers' Union which has seen its right to strike threatened recently, and rail and transport unions such as the RMT, which are the target of the Tories' new planned anti-union laws.

The National Shop Stewards Network is an important vehicle for building this solidarity.

We also know that this parliament will implement changes to adult education funding which could bring further cuts and redundancies across higher education and further education. Building a fighting union, linked with other trade unions and student groups, is the best preparation for future struggles which could open up in the sector.

Our union has shown its potential to stand alongside other fighting trade unions and lead the fightback. We have already begun to win concessions as a result of our strike action so far - but we must persist and be prepared to reject any offer which falls short.

This includes reballoting if necessary to keep up the momentum of the dispute.

Despite the general election result, this isn't a strong Tory government as the reshuffle crisis shows.

There is of course some anxiety related to the pressure that strike action puts on members. However, it is vital that we maintain the pressure in order for negotiations to be successful.

We have the employers on the back foot, but if they think that we can be bullied back into work then they will not feel forced into making concessions.

It is ironic that the very issues at stake - low pay, insecure work and excessive working conditions - are what can make strike action difficult. That's why it's vital that we stay strong and united, so that we can ensure these issues are addressed.

Local branches should call on support from other unions in their areas and link up with their local trade union councils to appeal for donation to the local strike pay fund.

We are at a crucial juncture and the strength of this action will determine not only victory in the dispute but also the ongoing strategy for the transformation of the union.

UCU is becoming a more combative union in this process. We are developing a new activist layer which now must be organised to facilitate the transformation of the union to a rank-and-file, member-led union, capable of uniting with other trade unions to defend against attacks and transform society.

The rank-and-file activists must be armed with the confidence and strategy to win on the two higher education disputes as a starting point for a fightback across both further and higher education, destroyed by decades of marketisation and austerity.

UCU members have 14 strike days at 74 universities in February and March: