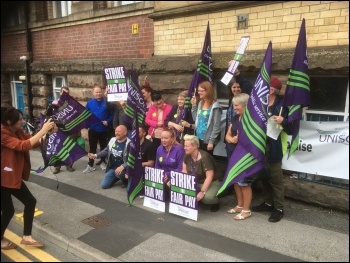 As Addaction charity workers in Wigan resumed strike action on 27 February, they expressed their anger that this national charity had spent £140,000 on a relaunch, ironically renaming the organisation "We Are With You" - presumably in an attempt to distance the organisation from the strike! This sum is more than enough to settle the dispute over broken promises and to pay staff, who work with people with drug and alcohol addiction problems, at NHS rates.

Under current Tory anti-union legislation the workers had to be reballoted by their trade union Unison, and despite the length of the dispute to date, they returned a Yes vote by over 96%!