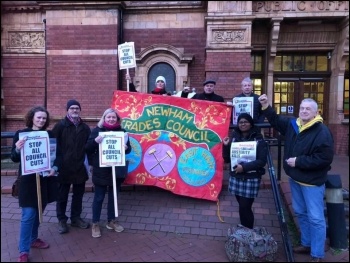 The council kept the details of their £45 million cuts meeting a secret, until very late, to prevent protests outside. But that didn't stop the Socialist Party, Newham trade union council and others on 2 March.

Socialist Party member Lois Austin said: "Newham is one of the poorest boroughs in the country. There's nothing left to cut."

The Labour council has gentrification plans too - pushing working-class residents out. A council bid for funds to 'improve' Queen's Market could be the thin end of the wedge and put in doubt the future of the market.

And they've refused to guarantee the future of sheltered accommodation - Hamara Ghar in Upton Park and Terry Waite House in Canning Town.

But councils have a choice. Newham council is sitting on £576 million in useable reserves.

They should refuse to make cuts - with the support of unions and local people - and demand the money back that has been stolen by the government.