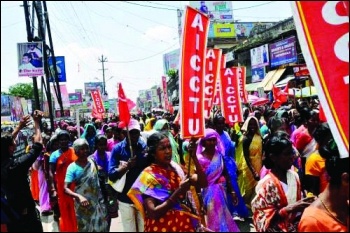 Dozens of people, mainly Muslims, were killed in the violence as the police stood aside or collaborated, and the capitalist politicians and city authorities did nothing to halt the attacks. A Delhi high court judge, critical of the government and police handling of the pogrom - who said he wasn't going to accept a repeat of the 1984 pogrom which killed 3,000 Sikhs - was quickly removed from his post and sent to another part of the country.

Trump praised India's prime minister Narendra Modi calling him, "a great leader and somebody who works for his people". Yet Modi is responsible for repressing the majority in Jammu and Kashmir by ending the area's nominal autonomy, and sending in thousands more Indian troops.

His BJP-led government has also passed a sectarian citizenship law which deprives many Muslims of Indian citizenship. Indeed, it was the latter law which attracted a demonstration in the capital immediately prior to retaliatory attacks by Hindu nationalists.

But Modi has only been able to get away with these attacks because of the weak Congress and left opposition parties in parliament, and the reluctance of the left parties and trade union leaders to launch an all-out struggle to his rule.

In January, a limited one-day general strike call by ten major trade union organisations attracted the support of 250 million workers. But this potential has not been built on. As New Socialist Alternative (CWI India) recently explained: "It is very clear from the course of events that the left in general has been found wanting. The general strike meant it had an opportunity to change the scenario from one of helplessness to an all-out struggle against the Modi regime."

New Socialist Alternative acts with a perspective of struggle and a combative programme to unite the masses against Modi.