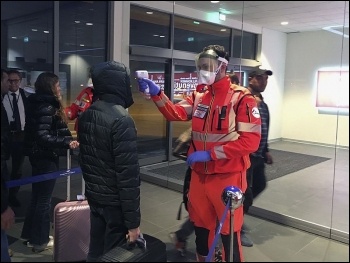 Prime Minister Giuseppe Conte first quarantined 16 million of the country's 60 million population in infected 'red zones', then announced that "the whole of Italy will become a protected zone."

Jo, a teacher from Bologna, spoke to the Socialist. "The children have already been at home for two weeks because the schools have been closed and they're saying they won't open again until 3 April. I'm self-employed so if I don't work I don't get paid.

"That's six weeks without any money. How am I supposed to feed my kids? The government is doing nothing to help us. And the health service is on the verge of collapse."

The mayor of one small village with over 1,000 Covid-19 cases, Castiglione d'Adda, has said "we feel truly alone. People are ill and are not receiving the necessary assistance. Help us please."

Thousands flooded roads and train stations to try to escape when the decree was leaked. The panic is understandable - no pay, no public services, and a crumbling healthcare system.

The state has promised €10 billion to support businesses and households and pledged to suspend mortgage payments. Calming the panic and stopping the spread will need a still greater influx of resources - and democratic oversight of the response by local workers and residents, rather than shock diktats from Rome.