Link to this page: https://www.socialistparty.org.uk/articles/30461

Editorial from the April edition of Socialism Today, issue 237 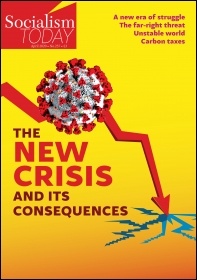 As global markets reel in the face of the developing coronavirus pandemic it is difficult to see how these events will not be the trigger for a new world capitalist economic downturn, with all the social and political consequences that will entail.

There is no doubt that the rapid spread of the virus and its disruptive impact has stunned the capitalist class and their political representatives.

On February 25 the chief economic advisor to Donald Trump, Larry Kudlow, breezily declared "we have contained this. I won't say airtight, but it's pretty close to airtight".

Just twenty days later on March 16, after the MSCI all-country world index, the widest measure of global markets, had suffered its heaviest weekly loss since 2008, the US Federal Reserve central bank was forced to make its biggest intervention since the crisis then.

An emergency interest rate cut, the second in two weeks, brought rates down to almost zero and 'quantitative easing' (QE) was resumed, with the Fed pledging to buy another $700 billion of US government bonds and mortgage-backed securities.

Hubris - excessive pride or self-confidence before a fall - doesn't begin to describe it.

The immediate certain effect of the supply and demand shocks the coronavirus crisis is inflicting will be a short-term recession.

But not every conjunctural shock or market gyration necessarily has a deep or sustained effect on the 'real economy'.

The stock markets of recent years had become even more disconnected from gross domestic product (GDP) or productivity growth, with the Cyclically-Adjusted Price to Earnings (CAPE) ratios for US shares prior to current events almost double the long-term average.

Daily turnover on the world's foreign currency (forex) exchanges is almost a hundred times the value of goods actually traded.

Despite the collapse of market values that has taken place, the global economy - the accumulated product of the labour, skills and technique of the working class - still possesses an enormous capacity with which to confront this crisis.

Nemesis, then, is not assured. But as the pandemic reveals anew the rotten stewardship of society by the capitalists all the signs are of severe consequences to come - and that the workers' movement needs to urgently prepare.

In a direct echo of the financial crisis inaugurated by the collapse of Lehman Brothers in 2008 the Federal Reserve also announced on March 16, alongside the European Central Bank and the central banks of Japan, Canada, Switzerland and the UK, a cut in the interest rate charged on dollar swap lines.

The aim was to bring down the cost banks and companies have to pay for the US dollars they need for many of their transactions, which had been surging up.

The dollar swap arrangements were one of the products of the international co-ordination that the capitalists initially attempted in the face of the 2008 crisis.

Then the Fed effectively acted as a global central bank, eventually providing $10 trillion to foreign central banks through currency swaps on top of $5 trillion in liquidity and loan guarantees to non-US banks.

This was followed, after the London meeting of the G20 countries in 2009, by an international programme of QE, of central banks creating money by purchasing financial assets.

The Fed quintupled its balance sheet of US government debt and mortgage securities from 2008 to 2015 (to $4.5 trillion).

The Bank of Japan brought up 40% of Japanese government bonds, while the Bank of England's £375 billion QE purchases saw it end up holding 26% of total UK government debt.

These measures of state intervention - not to extend public services or democratic ownership of the economy but to socialise the financial system's debts - did succeed in stabilising capitalism in the immediate aftermath of the financial crash and averting a 1930s-style Great Depression.

But it was the working class and middle classes who shouldered the burden for saving the system.

Big companies used the crisis to restore their profits by bearing down on workers' wages and conditions, so that by 2010 US corporate profits had recovered to $1.7 trillion - topping their 2006 peak - as 'unit labour costs' were falling by 2% per annum, the steepest cumulative decline since world war two.

In Britain it was only in December 2019 that average real weekly earnings excluding bonuses surpassed the pre-downturn peak of £473 recorded in March 2008. Meanwhile public services suffered a decade of debilitating austerity.

Stabilised - but not a new upswing of sustained development in productive potential.

But investment was 4% lower than its 50-year average, with total factor productivity growth since 2008 still just a fraction of the average 1.1% achieved even in the 20 years before.

The situation is much the same across all the G7 advanced capitalist countries. This is the position the capitalists have bequeathed to the working class as the world economy braces for the coronavirus pandemic hit.

But could the capitalists globally repeat at least their initial response in 2008 and co-ordinate the resources of the system so that the inevitable short-term recession does not become a deeper downturn?

After a decade of record profits and low investment there is capital around. Governments can borrow cheaply - at one point in early March investors in two-year UK government debt briefly had to pay for the privilege of lending to the state as yields turned negative. This has already been the case for some time for ten-year German government bonds.

But even a short-term recession means a re-alignment of values between companies, classes - and capitalist nation states.

The nation state is still the economic and political basis upon which capitalism is organised, alongside private ownership of the commanding sectors of the means of producing the goods and services that we consume.

One nation state's fiscal stimulus is an opportunity for another nationally-organised capitalist class to profitably send goods and services across borders.

A depreciated currency is another means to siphon off expenditure by rival capitalists.

A dominant hegemonic power can mediate between the different interests of smaller powers, looking after its own interests of course in the process.

That essentially was the role of US imperialism in 2008, still then in the end days of its moment as the unchallenged hyperpower that had emerged triumphant from the post-world war two cold war with Russian Stalinism in the early 1990s.

But the big difference now with 2008 is that the balance of world economic relations has changed.

The Chinese regime responded in 2008 with a massive investment stimulus of approximately 12.5% of GDP.

But the state's control of its capital account enabled it to protect its position by effectively depreciating its currency against the dollar - avoiding an appreciation by buying dollar-denominated securities to peg the yuan to the dollar - and so build up its current account surplus at US capitalism's expense.

At the start of the 2008 crisis China's GDP at market-exchange rates was one-fifth the size of the USA's. Going into this crisis, twelve years later, it has grown to almost half.

During the cold war US capitalism would frequently bully its Western 'trading partners' sheltering under its military umbrella, as with Japan's acquiescence to 'voluntary export restraints' in the 1985 Plaza accord (the reverberations from which were a factor behind the 'Black Monday' stock market crash in 1987).

Japan's world export share at that point was 10%, less than China's current share, but fell back under US pressure (to now less than 4%).

The Chinese regime blames Japan's cave-in at Plaza for its subsequent 'lost decades' of economic stagnation and is determined that the Chinese economy will not repeat that experience.

Although China moved in 2016 to managing the yuan against a basket of currencies to reduce its surplus and ease tensions, the clamour has not abated from the majority of the US ruling class - even before a new downturn is underway - for action against China, reflecting the deeper crisis in inter-imperialist relations.

US capitalism, Trump or no, will not play the same role it did in 2008.

Preparing for a new era

Capitalism is entering uncharted waters with the world economy still not recovered from the previous crisis and with the institutions and ideologies it relies on to sustain its rule deeply undermined by the preceding period.

Polls on attitudes to quarantines, for example, show majority support for government health advice at this early stage in the coronavirus crisis but also, even now, big reservoirs of mistrust. (Confidence in America was lower than in Italy, which in turn was less than in Germany and Britain).

This scepticism will be exacerbated by the profound shaking up of all aspects of life the pandemic will entail.

Consciousness will also develop to question other aspects of current social relations, set by capitalist mores.

The climate crisis, an existential threat to humanity, remains. Why can't the emergency mobilisation of resources by the state be applied here too, for example, rather than reliance on failed market methods, as we explore in this month's Socialism Today global warning column.

In the absence of a clear lead by the working class movement, it is true, other, reactionary forces, can also partially occupy the vacuum.

With right-wing politicians like Hungarian premier Viktor Orbán not slow to blame 'foreigners' for the coronavirus crisis - and Trump too speaking of the "foreign virus" - there will be new opportunities for the far right to develop which the workers' movement must respond to, as Peter Taaffe examines in his article also in this month's magazine.

But events will also bring to the fore workers' consciousness of their collective, social role in society, with political consequences.

The first ever public health act in Britain, then the world's predominant capitalist power, was introduced in 1848 after a series of deadly cholera outbreaks but, most significantly, against the backdrop of the rise of Chartism, the world's first independent working class political party, and the European revolutions of that year.

The coronavirus crisis is without doubt a new turning point in world perspectives. Its consequences will only fully work themselves out over time.

But they will be part of the interlinking of objective and subjective factors in a new era - discussed in the article by Tony Saunois in this edition - which can help develop workers' and young people's consciousness: towards the programme and the organisational forms necessary to decisively overturn capitalism and begin the construction of a new, socialist society.