Link to this page: https://www.socialistparty.org.uk/articles/30470 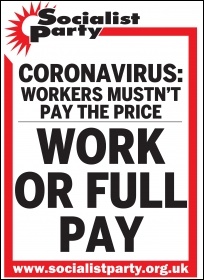 Finally, Johnson and Sunak have responded to growing public anger and agreed to pay 80% of the wages of workers who are laid off because of the coronavirus.

This will be welcomed by millions of workers who are desperately worried, not just about the virus, but how they are going to survive from day to day.

But this 'wartime' response by the government is far from the Blitz myth of 'we're all in it together'. On the contrary, it means workers taking a 20% hit on their wages while the bosses don't have to pay anything!

And once again it's too little too late.

Tens of thousands of mainly low-paid workers have already lost their jobs. They must all be reinstated immediately.

For workers already struggling to pay the bills, 80% of wages will not be enough to live on. Sunak has said there is "no limit" on what the government will spend. Then pay us 100% now!

And that money has to go to all workers. Millions of self-employed and workers in the gig economy will still only get statutory sick pay - a measly £94.25 a week, one of the lowest in Europe - or paltry state benefits.

We say work or full pay - with the money going directly to workers, not as a subsidy to the bosses.

It's good that that the government has announced some legal protection against summary evictions for the next three months.

But it's not clear how this will be enforced. Some workers are continuing to be kicked out of their homes.

And rent will still be due, with renters facing huge debts and possible eviction further down the line.

Rents must be written off as well as mortgages for the duration of the crisis, and democratically controlled hardship funds set up for landlords in genuine need.

Too little too late doesn't just apply to the help on offer for workers affected by the crisis. From day one this government has failed to act quickly enough to deal with the coronavirus crisis.

As the editor in chief of the Lancet said: "These dangers were clear from the very beginning. We have wasted seven weeks".

A government of big business, it has put profits before the health and welfare of working-class people.

Cuts and austerity have meant frontline health and social care workers risking their own health because of lack of masks and other personal protective equipment.

A shortage of NHS test kits is putting lives in danger, while the rich can pay for testing . 44% of general and acute beds have been cut since 1987.

With only 3,700 adult critical care beds and 8,000 ventilators in the NHS, medical staff could soon be faced with making decisions about who should live or die, as is already happening in Italy.

Urgent action is needed. There must be an immediate massive injection of money and resources into the NHS and social care, to expand the supply of beds, equipment and staff.

All private medical facilities must be seized and integrated into the NHS - and not a penny paid to the private profiteers.

The pharmaceutical companies were researching a coronavirus vaccine during the Sars epidemic but abandoned it when the epidemic ended because they no longer had a profitable market.

These companies should be nationalised and brought under the democratic control of the NHS to guarantee research and the production and supply of medicines, vaccines, treatments and equipment.

The big supermarket companies have been quite happy to see their shelves empty as long as their cash tills are full.

Now under pressure they have been forced to introduce an element of rationing. And the government is 'relaxing' competition rules so that the retail companies can coordinate food supplies and use each other's vehicles for distribution.

But the supermarket bosses put profit before all else and cannot be left in charge of who can get hold of essentials.

It couldn't be clearer. The coronavirus virus crisis has exposed the complete inability of the capitalist market economy, based on profit and competition, to meet the needs of working-class people.

More and more the state is having to intervene to try to plug the gaps and overcome the inadequacies of the market.

The economy is crying out for a coordinated plan of production and distribution of food, medical equipment and supplies, and other goods.

But that will only be possible if the major manufacturing, service and financial industries are taken into public ownership and control.

Then, workers, consumers and service users can democratically decide what will be produced, where it will be distributed, and guarantee a decent income for everyone.

Coronavirus is turning the world upside down. We need to organise and fight to ensure that the future is a socialist one - meeting the needs of the majority in society, not just a rich and powerful minority. Join us in that fight.