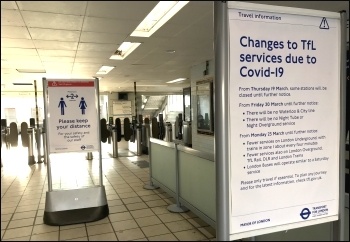 New tests have found that 'high-pressure laminate' (HPL) cladding is almost as deadly as Grenfell's 'aluminium composite material' (ACM) cladding in a fire. In 2017, 72 people were killed when profit-motivated cladding on Grenfell Tower acted like a wick spreading an inferno up the building.

As of September 2019, over two years later, government figures still recorded up to 24,800 homes in 324 buildings covered in Grenfell-style ACM cladding. Industry data suggests at least a further 340 tall buildings have dangerous non-ACM cladding, including combustible HPL, says Inside Housing.

The Fire Brigades Union (FBU) says that buildings "could and should have been made safer with a comprehensive testing regime immediately after Grenfell, but the government failed to act." FBU general secretary Matt Wrack points out that "with people spending far more time at home under the lockdown, this is a ticking time bomb."

It's another failure of the big business politicians and the capitalist system, which put profit above preparation. Cladding off now! No safety - no rent!

On 27 March the government instructed local councils to house all the homeless by the end of the week. Great - but if that was always possible, why are councils only doing it now?

Why the hell were they waiting for a pandemic and an order from the Tories to give them an excuse to end homelessness? The Local Government Association has said councils will need more funding to cover this - why didn't they demand it before?

Meanwhile, in Las Vegas, rough sleepers are allotted parking spaces to sleep on to maintain social distance! Rough sleepers in various European countries are turfed out of shelters to prevent contagion, fined for being in public, or herded into packed gyms!

We say councils in Britain must reverse all funding cuts and demand the money local areas so urgently need. Seize empty homes now, and start a mass council house building programme as soon as Covid-19 passes!

Economic output in the UK could plummet an unprecedented 15% in the second quarter of 2020, reckons the Centre for Economics and Business Research. Japanese bank Nomura is more optimistic - a mere 13.5% nosedive in 'gross domestic product' (GDP).

To put this in perspective, during the worst year for the Great Depression, 1932, GDP in the United States fell 12.9%. Of course, that was for a full year, not just three months, and British capitalism may recover a little by 2021.

But that's cold comfort to the millions of workers already losing pay and jobs. Returning to the US, an astounding 3.28 million workers filed unemployment claims in just one week. The third week of March 2020 shattered the previous record - 695,000 in the last week of September 1982 - by a factor of five.