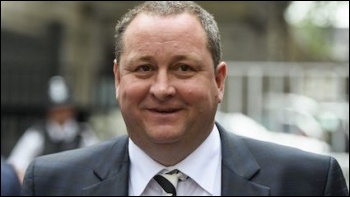 I work for one of the retail chains in Mike Ashley's empire. As more shops were closing, pressure began mounting for our chain to close too. But we were expected to lone work, rather than simply closing the shop down.

Lines of communication were set up between stores so lone workers could check in regularly - as if this would somehow guarantee their safety.

This move completely backfired. It became a place for workers in different stores to come together.

The bosses have flagrant disregard for our safety. Some angry workers began sharing links to trade union websites.

We would have remained open unless we were specifically told to close. Despite the government finally announcing on Monday 23 March that all non-essential shops were to close, we received emails the next morning from upper management stating that we were expected to work until at least Friday.

Staff safety was put a firm second behind 'securing' stock. Workers were expected to come in and ship stock back to head office.

None of us received personal protective equipment. We were specifically instructed that workers who aren't self-isolating and refuse to work will have their pay docked.

We were told that only a certain number of people were allowed in stores, but simultaneously the company still expected all staff to turn up. At my shop, a skeleton crew agreed to carry out what the company deemed "essential lockdown procedures" and we had everything done by Wednesday.

My manager had been one of the most hostile and antagonistic to any union presence. But they have u-turned, and went as far as altering the timesheet, declaring that all workers had done their week's hours by Wednesday to ensure that nobody lost pay.

Workers' anger at how they have been treated by the bosses won't be forgotten when this lockdown is over.