From The Socialist newspaper, 6 April 2020 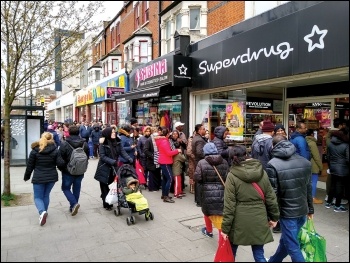 A queue out the door of a pharmacy in East Ham, London, March 2020, photo Dave Carr   (Click to enlarge)

The government's laissez-faire attitude towards supplies, in effect contracting out any control of this to the major retailers, means there have been opportunities abundant for speculators to rip people off.

Individual profiteers have been selling items at inflated prices via online marketplace platforms like eBay and Amazon. One user made £1,000 selling toilet roll for double the retail price, according to the Guardian. Another was selling a 72-pack of Andrex for £84.99, more than three times its normal price of £27, with another selling them for £99.90!

Care homes have paid suppliers for aprons at 166% of usual prices, reports the Times - and masks at a whopping 1,000%! One Dr Mark Ali made £1.7 million in just one week selling coronavirus tests through his company, 'Private Harley Street Clinic Ltd', based out of a north London flat.

These were then sent to Randox Laboratories in Northern Ireland. Ali charged £375 a test, while Randox provides them directly for an already-high £120.

The capitalist system prioritises profit, not need, and continues to do so even in these crisis conditions. The government should implement price controls, under the democratic oversight of the trade unions, to prevent further abuses.

Big firms which bend the rules should be nationalised. Unions should also elect local committees of retail workers and consumers to control rationing policies where there are shortages, and form part of the oversight of price controls.

These are essential working-class counters to the profit system in this emergency. But the only way to prevent these problems outright is bringing all the major food and staple goods manufacturers, distributors and retailers into public ownership, as part of a democratic plan of production to meet people's needs. That would be a core part of a socialist programme.