Editorial of the Socialist issue 1081 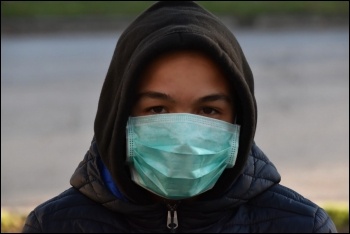 "And I want to thank them (key workers) and also the leaders of the trade unions who represent them..."

These were the words of Michael Gove at the Tory government's daily briefing on 31 March. This from the ex-education minister, in office at the height of the cuts offensive between 2010-14. Such was the hatred towards him that the teaching unions all passed votes of no confidence in him. Yet now he is a firm fan of the union leaders!

This comes on the back of the uncritical response of some union leaders to the government's measures over coronavirus. With this undeclared 'truce' the union leaders are effectively giving in to the capitalist establishment's pressure for national unity, trying to suspend the class struggle. This should act as a warning to union members and reps who have to keep their union leaders under pressure to resist.

After the recent National Executive Committee of the PCS union, the union's general secretary Mark Serwotka reported in a video message on discussions with the government. He said that normally at this time, PCS would present its full pay claim. But due to the crisis, PCS had voluntarily "parked" this, and instead put forward a watered down "interim" submission.

This can create the illusion that the same Tory government which has hammered civil servants over the last decade - particularly targeting PCS by trying to financially bankrupt the union by stopping the deduction of union dues from salaries ('check-off') - will look fondly at the union once the crisis abates.

However, this is not the experience of those PCS members on the frontline, forced to come to work in offices and call centres, often short of safe working procedures and hand sanitisers.

This is especially so in departments such as DWP, where workers are struggling to cope with the one million Universal Credit applications, or HMRC which has to administer the thrown together 80% compensation scheme for waged, and now self-employed, workers.

There have also been joint communications from rail and transport unions with the Department of Transport. Yet this is the same Tory government that still has plans for vicious anti-union laws on the table, directed precisely at these unions.

Where is the public call for Johnson to drop this threatened legislation, as well as the undemocratic ballot thresholds brought in by Cameron in the Trade Union Act in 2016?

This approach can disarm workers. While many workers will welcome the government concessions that have been made, they are not enough.

The unions need to fight for more, as well as preparing members for when the government and bosses go on the offensive later. They have to warn these employers that any attempt to take anything back will be met with fierce resistance from unions and their members.

Key and emergency workers have enormous power right now. Surrey FBU and its firefighting members have waged a tenacious struggle against the brutal Tory Surrey county council. Their members walked out last week over safety in one of the fire stations.

The union has suspended an overtime ban during the current crisis, and the council has delayed the second phase of its fire service cuts. But the first part, cutting four fire engines, went ahead on 1 April. The real danger is that the council will come back later, when the crisis eases, and the leverage of the union and its members is lowered.

Similarly, despite winning a strike vote by 96% on a 80% turnout, Unite has suspended action on pay by its refuse members against privateer Biffa at Labour Wirral Council. Yet just as we go to print, they have walked out over safety fears.

Like many others, these two groups of workers are showing that they are prepared to take action to defend their safety. Short, sharp, wildcat action in Royal Mail, construction and other sectors has often resulted in victory.

The firefighters in Surrey and binworkers in Wirral can gain confidence from their unofficial action during the pandemic to carry over into their official disputes against cuts and pay respectively.

The TUC is happy to tweet about action taken by workers in the USA but not posties in Scotland!

Where these actions are published, as in the Socialist and in the National Shop Stewards Network (NSSN) Forum, they can give confidence to others that it is possible to fight now.

That's why rank-and-file networks such as the NSSN are so important in the current period, to help organise the rising tide of struggle today and tomorrow.