From the frontline: B&M Bargains management puts profit before safety 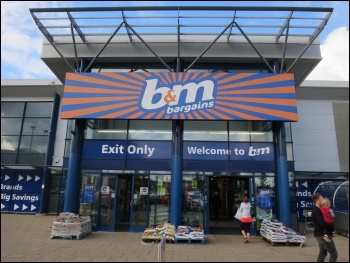 The attitude of B&M Bargains management has been 'business as usual'. Some staff are furloughed, often in stores in shopping centres which have closed anyway, and some admin staff. But most are still working, with the company's attitude being that we can pick up sales from competitors while they are closed.

B&M management is using the argument that we are key workers because we sell food, but it's a minority of what we usually sell, and in my store we're selling even less than usual at the moment. Instead, most of the people coming in are in the garden, DIY and paint aisles.

In the rush to sell as much as possible, health and safety is going out the window. We've had cages blocking fire exits so people can restock quicker. The cleaner in store had to self-isolate, yet for days no-one replaced her. Our till screens are next to useless. They are free standing but they keep falling and hitting the cashiers on the head. It's been reported to management but nothing is being done.

Easter weekend was the worst period. We had a policy of only allowing 20 people in the store at a time, then it went up to 30, 35, 40 and then 120 at a time! Management told us they were letting in "only how many we feel safe" - I think they really wanted to make as much money as possible. To cap it all, we had a regional manager in on Good Friday. Was he concerned about our safety? No, he was more bothered about stock on the paint aisle!

It's only through the union, Usdaw that we've managed to win 10% hazard pay for those still working, but only from 29 March on old wage rates. We've also managed to get the company to agree to furlough staff, with letters telling them to 'shield' on 80% pay instead of just sick pay.

With a low union density at the moment, and just nine union reps across the country, we need more B&M Bargains workers to join Usdaw and get organised.