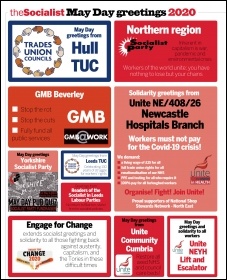 Some of the May Day greetings in the Socialist, May 2020   (Click to enlarge)

At that time, trade unions were mostly based among skilled 'craft' workers. These 'aristocrats of labour' found political expression by riding on the coat-tails of the capitalist Liberal Party. As industrialisation developed, however, unskilled sections of workers arose in industry. But the attitude of most craft trade union leaders was that such workers simply couldn't be organised, and would be a drain on their strike funds.

It was in this period that International Workers' Day originated. It started in the US, where strikes took place in May 1886 for the eight-hour day, with strikers often facing repression from the police. In 1889, the newly founded Socialist International called for protests and strikes demanding the eight-hour day to take place on or near 1 May 1890.

In Britain, socialists like Eleanor Marx pioneered the May Day marches, seeking to build a coalition between the socialist groups and the wider working class, including the craft unions.

Eleanor Marx, along with socialists like the Leeds-based Tom Maguire, as well as workers like Tom Mann, Ben Tillett and Will Thorne, who had passed through the ranks of socialist organisations, also helped to organise mass strikes, and build the 'new unions' organising unskilled workers, who were suffering horrendous working conditions.

Despite attempts by the craft unions to split the 1890 London May Day demonstration, around 100,000 turned out. 90% of those attending crowded the platforms organised by Eleanor Marx and the new unions. Karl Marx's collaborator, Friedrich Engels, was on one of these platforms and later commented: "And I hold it to be the most important and magnificent in the entire May Day celebration that on May 4, 1890, the English proletariat, rousing itself from forty years' winter sleep, rejoined the movement of its class."

The new unions and socialists also demonstrated in Leeds, through the newly established Yorkshire Labour Council. The previous year, they had successfully organised a strike over pay by several thousand building labourers. Now they were in the run up to what Engels called 'The Battle of Leeds'. This was the tremendous strike of gas workers in defence of the concessions - eight-hour day, paid holidays, time and a half for overtime - wrested from the council who owned the gas works in Leeds.

The Leeds Mercury reported that 30-40,000 attended the Leeds demonstration. The Yorkshire Post reported the march was so large that the speakers at the rally were delayed by an hour so that the whole march could reach the rally.

The resolution, passed from both of the platforms set up at the rally stated: "This meeting rejoices in the universal action taken by the workmen of the civilised world with respect to the necessity of an eight hours working day, and regards it hopefully as the first step towards the abolition of national and industrial war, the overthrow of race hatreds between the working classes, and the final emancipation of labour."

But as well as the immediate industrial issue of the eight-hour day, political issues were raised too. In her speech at the London demonstration, Eleanor Marx said: "We must kick these Liberal and Radical members out if they refuse to support our programme. I am speaking this afternoon not only as a trade unionist, but as a socialist.

"Socialists believe that the eight hours' day is the first and most immediate step to be taken, and we aim at a time when there will no longer be one class supporting two others, but the unemployed both at the top and at the bottom of society will be got rid of."

This was to be the music of the future. Just one month later, during the gas strike, Liberal councillors used the town hall to shelter and entertain strike breakers. The following year, during the Manningham Mills dispute, the Liberal-controlled watch committee allowed the police to be used to break up their demonstrations, and the poor law guardians refused strikers relief.

130 years on, these struggles continue. During the Covid-19 crisis, Keir Starmer, newly-elected leader of the Labour Party, seems to be even keener than some government ministers to represent the desire of big business to defend their profits and force workers back into potentially unsafe workplaces. The question of independent working-class political representation is back on the agenda.

Workers have won concessions to improve their conditions over the years. But experience has shown that, in a capitalist system, these concessions can be taken back in the drive for profit. In the current crisis, workers are having to work in unsafe working conditions due to lack of PPE, or the greed of construction bosses who refuse to furlough workers.

The threat of lay-offs and redundancies hangs over many workers whose workplaces have shut. Many only take home the 80% furlough pay, and others have been forced to use up annual leave.

To ensure adequate safety protection, workers need to organise and take control in their own workplaces. The steps in this direction, through action by London bus workers and postal workers, for example, shows what can be done.

But to permanently achieve the aims of the pioneers of May Day - not just an eight-hour day and decent pay and conditions but a society that meets all the needs of ordinary people - we need to go further and fight to bring the major companies and finance institutions into public ownership under democratic workers' control and management.

See our 2020 May Day greetings here