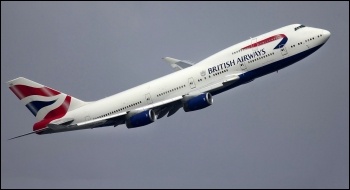 British Airways' announcement of 12,000 redundancies represents an opportunistic attack on its workforce. The British Airways/International Airline Group board are firm believers in the neoliberal view of never allowing a crisis to be wasted.

In addition to the redundancies, the airline is threatening to dismiss the whole workforce and 'invite' up to 75% of its employees to reapply, accepting new contracts which have worse pay and poorer terms and conditions.

To be clear, this is not a move from the company driven by economic necessity - International Airline Group is sitting on a cash pile and credit lines to the tune of £10 billion plus. Those cash reserves could easily see the company through to 2022.

International Airline Group has accepted a government bailout in Spain, but campaigns for no industry help in the UK. The company clearly hopes its competitors will go to the wall and it will emerge from this crisis with a lower cost base, ensuring monopolistic profits for its shareholders.

The airline has shown no empathy for its workforce in a time of pandemic. It insisted its frontline employees continued to work without PPE, resulting in the tragic death of flying crew and ground staff.

It equally shows no feeling for the present situation, where every family is struggling with anxiety and loss due to the pandemic. Although this looks like a devastating announcement, and individual workers sitting at home furloughed, and isolated are unable to feel their collective strength, resistance to all these proposals is possible.

This would be the first time in the airline's history that the management attempted to take on the whole workforce. As long as we act collectively and negotiate at a national level the workforce will see off this challenge. It is not a simple matter to dismiss everybody and reconstitute a new airline without the cooperation of the workforce.

Given that half the workforce is furloughed, it shows how many sections are still required to operate in order to maintain the grounded fleet. Customer relations are still dealing with millions of customer requests for refunds or rebookings; and engineering is still 'mothballing' the planes which have to be regularly checked in order to keep their airworthiness.

Although British Airways' operation has been consolidated into Heathrow Terminal 5, we are still flying 20 to 30 flights a day which require all the operational functions. In addition, there are unprecedented levels of cargo it is trying to get onto a limited schedule. Postal bags, for instance, have been going into overhead lockers. There is considerable IT infrastructure that needs to be supported while we are flying at least one aircraft.

Unite and the GMB unions are launching a legal challenge. British Airways is taking part in the job retention scheme, known as furloughing, while it announces, with considerable brass neck its intention to implement redundancies. Part of the furloughing arrangement is that workers are not contacted by their employer. This means it would be impossible to have meaningful consultation, which breaks the law.

British Airways would like the different sections of its workforce - cabin crew, pilots, ground services, engineering and head office - to negotiate separately on the company's proposals. This must not happen. We need to engage collectively at a national level, not allowing any section to be picked off, and demand that all UK operations are nationalised to save jobs.

The anger of the workforce must now be channelled into a determination to resist this brutal smash and grab on employees pay, and terms and conditions. Together we can resist and win.