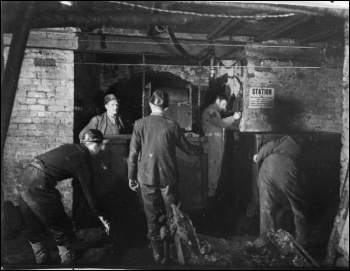 I have been enjoying reading the articles on World War Two. There are many lessons to be learnt for today for our class and the youth.

The article 'Class collaboration and worker militancy in World War Two Britain' (see socialistparty.org.uk) by Alec Thraves, mentioned the apprentices' strikes of 1944. These took place in the North East, North West and Yorkshire.

I have a particular interest in this dispute, as not only am I from Tyneside, but my uncle Roy was involved with the Tyneside apprentices strike, and went to prison for his actions. I can remember my mam and dad discussing it when I was a young girl, as they too had played a role in the strike.

Coal was the major fuel for industry and shipping in those days, and so essential for the war economy. Extra demands were made of the miners to produce more coal. As the article mentioned, the miners went on strike for more pay and demanded nationalisation.

In January 1944, at a time when the government needed coal the most, it had provoked the biggest single miners' strike since the 1926 General Strike. This was despite massive profits being made by the coal owners.

Today, the Tory government has totally mismanaged the war against coronavirus, and will pay the price when workers' anger translates into industrial action and protest.

In 1944, the government blamed the miners' strike on a 'Trotskyist conspiracy'. Ernest Bevin, right-wing Labour MP and Minister for Labour, claimed that the miners' strike "was worse than if Hitler had bombed Sheffield and cut our communications."

Bevin received the full support of the Trade Union Congress leaders (TUC - the umbrella organisation of trade unions) who attacked the miners, saying they had "struck a blow in the back of their comrades fighting in the armed forces". The TUC was representing the so-called national interest against the interest of workers.

The pro-Stalin Communist Party newspaper the Daily Worker (forerunner of the Morning Star), also urged the striking miners to go back to work.

The Bevin Ballot scheme was designed to send 10% of apprentices down the mines which, as Alec Thraves points out, was more dangerous than being in the armed forces due to poor health and safety provision.

Workers today are fighting for better health and safety provision to fight this deadly coronavirus, and we are in danger of being conscripted back to work for the benefit of big business, hungry for profits. Business leaders have floated the idea of the young returning to work first. Again, sacrificing the young in their pursuit of profit.

The Bevin Ballot scheme was one of the most unpopular measures of the war. It met with fierce opposition, particularly on Tyneside. Many of the apprentices, 'Bevin Boys', conscripted to the mines in 1944, had been on very low pay for three or four years.

They at least hoped that they would complete their apprenticeships as skilled workers, but the Bevin Ballot took that away. They were given no guarantees that they could take up their chosen trade when the war ended.

Their militancy is hugely significant as this group of workers were bound by contract to their employers. They were not allowed to go on strike, and some were not even allowed to join a trade union.

Given the opposition of the TUC, the apprentices set up the Tyne Apprentices Guild and approached the Revolutionary Communist Party, (RCP - forerunner of the Socialist Party) for support. With the help of the RCP they linked up with apprentices on Clydeside and elsewhere, and recruited the support of family members and other workers. They helped the apprentices produce leaflets to distribute.

By the end of March 1944, 26,000 apprentices on the Tyne, Glasgow, and other industrial areas were on strike against the Bevin Ballot scheme, and in support of the call for the nationalisation of the mines.

The activities of the RCP had not gone unnoticed and, despite being a relatively small organisation, had been discussed at Cabinet level. MI5 (the domestic secret service) had a file on them.

The apprentices' strike lasted two weeks, and straight after their return to work the police raided the headquarters of the RCP. Homes of party members were also raided.

My uncle, Roy Tearse, industrial organiser of the RCP, was one of those arrested on Tyneside, along with Ann Keen and Heaton Lee. Another RCP leader, Jock Haston, was later arrested in Edinburgh. The press was vicious in condemning them. Headlines labelled Roy Tearse the "evil cripple" as he had been disabled from childhood polio.

Roy and his fellow comrades were tried under the hated Trade Disputes Act which declared that: "No person shall declare, instigate or incite any other person to take part in, or shall otherwise act in furtherance of any strike among persons engaged in the performance of essential services or any lock-out of persons so engaged". They were also charged with conspiracy.

Sympathetic soldiers petitioned the home secretary. In their letter they wrote: "Tearse and his comrades are accused of fomenting the strike amongst the apprentices and the coal miners. We do not believe that that is true. That they gave guidance and advice to the miners and apprentices is to their credit, for that is the job of all faithful workers' leaders."

They went on to say: "We soldiers are also workers. We do not want to come back to a life where living conditions have been driven down to intolerable levels. We consider the miners' fight as a struggle to maintain these rights". Soldiers in the Eighth Army (drawn from across the Commonwealth) declared that the "right to strike is part of the freedom we fight for".

These words must have struck terror in those at the heart of government and representing the interests of big business. When soldiers begin to understand their common interest with workers and identify as workers, then the very existence of capitalism is in jeopardy.

The defence campaign also won the support of trade union branches around the country.

The four were still convicted though. Roy Tears and Heaton Lee were given 12-month jail terms, Jock Haston six months, and Ann Keen 13 days. But in September 1944, the convictions were quashed.

The prosecution of these Trotskyists was the most significant anti-worker militant criminal pro-secution undertaken by the ruling class for many years.

The RCP militants had been up against the might of the state during a world war. But they had successfully appealed to their class and won support, along with some Labour MPs like Jimmy Maxton and Ernest Silverman.

The overturning of the conviction was a victory, not just for the RCP but for workers everywhere. The organised working class had gained one of the most important legal victories in the struggle against anti-union legislation. The defence had upheld the right to strike.

Already, in the struggle by workers to win safe working conditions during the coronavirus crisis, unofficial, and therefore illegal, strikes under the current law have taken place. These victories will not be lost on workers, and can be the spearhead of a future campaign to overturn the Tories anti-union legislation.