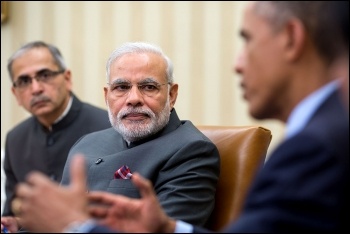 The coronavirus crisis has exposed all the inadequacies, incapacities, and insoluble contradictions of India's capitalist state.

The 21-day lockdown (now extended until 3 May) was announced in a shoddy and authoritarian way by the right-wing, Hindu-nationalist Prime Minister, Narendra Modi.

On 24 March, just four hours' notice was given of the complete lockdown to be complied with by the mammoth population of 1.34 billion. It shows the inept nature of these capitalist representatives, especially in neo-colonial countries like India.

Within minutes of Modi declaring the lockdown, the privileged upper-middle class, with hefty salaries, thronged shopping malls and marts to grab everything, especially food items. It was unbelievable coming across empty shops.

The middle class and the rich, who are the mainstay of support for the right-wing Modi, are full of praise for the prime minister's 'visionary' actions.

The lockdown comes at a time when the state's weakened public distribution system (PDS) has been systematically destroyed by decades of neoliberalism. Consequently, food distribution was thrown into utter chaos owing to widespread supply shortages.

Even before Covid-19, India accounted for a quarter of the world's child deaths. This is because the market maximises the production of what is profitable, not what is socially necessary - luxury condominiums, not public hospitals.

Regions across the country face acute shortages of doctors and nurses, as well as basics like test kits, hospital beds, ventilators, masks and gloves, sanitary supplies, cleaning products, transportation, and almost every other element of the goods and services necessary to get out of this crisis.

This current system of society, based on a rapacious capitalist class working to safeguard only its own interests, cannot and will not save India from the coronavirus.

The country is said to have 14 to 16 million migrant workers (from within the country), but unofficial estimates place the number way above the official count. The migrant workers engaged in construction, road building, ancillary industries, and various other hazardous jobs - who make a significant contribution to the economy - have been left abandoned during this crisis. Now they are subjected to harassment by the local mafia, usurers, landlords, and loan sharks.

The abrupt country-wide lockdown has been a death warrant for many migrant families living in the shanty towns of large metropolises and other towns. Most of them do not enjoy social security benefits or tickets to other welfare.

With the lockdown extended to 40 days and no additional relief measures announced, migrant workers' distress will only increase.

Signs of their burning discontent came to the fore recently in Surat and Mumbai, as thousands gathered on the streets. All they wanted was to be extricated from the continued trauma imposed by the brutal lockdown and be able to go home.

Modi announced on 29 April that students and migrant workers can go home, but the government will not run special trains. Going by bus means that some journeys could take two or three days!

India's societal curse - the caste system - has a built-in structural apathy and animosity towards the labouring classes. The privileged sections of society - particularly those with comfortable incomes and owning and controlling resources, like land, access to drinking water, factories, houses - show complete disdain towards the real wealth creators in society - the mass of blue and black-collar (illegal) workers.

The regime of the Modi government is avowedly anti-poor. Unlike the Congress Party governments before, its social base is not the poorer sections of the population. It is a party fundamentally of traders and the 'successful' middle classes. It unabashedly represents the Indian elite's disdain for the labouring poor, which is so deep-seated that it makes it impossible to admit that the poor might even be essential people.

The opinion-makers - the '1%' along with the 2% or 3% of the upper-middle classes and privileged castes - have not only hogged all the resources historically but have seen to it that government policies (be it BJP or Congress) predominantly cater to their greed and not the dire needs of the majority.

This grotesque reality has been starkly exposed during this coronavirus crisis. Democracy in India is a privilege that the minority of 'haves' enjoy by riding high on the bent backs and starved stomachs of the majority of 'have-nots'.

51% of India's rural population is landless. For farmworkers across many states, work has come to a standstill in the fields. While the government announced an economic package in March, this relief has only focused on the landed farmers. For the landless labourers, there has been no income over the last weeks, forcing them to adopt drastic measures like reducing their own food intake.

When the lockdown began, hundreds of thousands of young workers decided to head back home. Because of the ham-fisted way in which the logistics of the lockdown were handled, all rail and road transport was brought to a grinding halt.

Many tens of thousands started walking from various cities of India, not only to join their families but also to be available for the seasonal work of harvesting.

Many covered the unimaginable distances of hundreds of kilometres on foot, and others managed to hitch rides on trucks.

By the time they completed their horrendous journeys to their native places, the bleeding blisters on their feet left a trail along the dusty roads of rural India. Some, especially the older people and the women, sometimes failed to complete their journeys.

Large farmers in many villages, particularly in the north of India, decided to use harvester machines because hiring labour during the lockdown was more difficult. As a result, the farm workers have been left with absolutely no income whatsoever.

The 'omnipotent' prime minister has been tall on promises. Given the rate at which he has verbally promised a raft of 'goodies' in his six years of rule, by this time, his favourite phrase of "achche din" ("the good days") should have become a reality.

Now, his recent television broadcast is full of white lies. As well as many high-sounding schemes, the announcement of 2,000 Rupees ($26) direct bank transfers to peasants under the PM-Kisan (farmers) scheme is hogwash.

Farmers are anyway entitled to 6,000 Rupees ($78) annually. This is usually paid in three instalments. The government has merely advanced the payment of one instalment. And even this poverty assurance has not been extended to landless labourers or the small tenant farmers.

While the Modi government has announced free rice to be available through the public distribution system, there are umpteen complaints from across all the states that the promised rice is getting siphoned off due to corruption.

Those with small children are affected in a very bad way. They are even struggling to feed them. New mothers in rural areas are already starving and not able even to suckle their babies.

On the one hand, millions of tons of food grain are rotting away in the storehouses of the government, but children are being abandoned by parents who cannot feed them.

Coronavirus landed in India when the country was raging with protests against the Citizenship Amendment Act (CAA), which discriminates against Muslims and criminalises their very existence in the country.

As far as Modi and co are concerned, Covid-19 was a god-sent tool to control the vast population by instilling fear of imminent death. They used the Covid-19 threat to further criminalise the religious and national minorities, particularly Muslims.

Internet thugs on the payroll of the BJP unleashed a rumour war to foist Islamophobia upon the people. The recent Delhi riots (predominantly anti-Muslim) gave them the necessary alibi to build a scare campaign among ordinary Hindus. While every religious grouping was flouting lockdown norms, Muslim congregations were targeted and rumours of a 'Corona Jihad' were spread to polarise public opinion against Muslims.

The police in various states are using the curfew norms to launch a reign of terror against the people, all while the virus spreads unchecked amid society's most vulnerable.

Instead of a total lockdown, the government could have announced a halt to all gatherings and non-essential businesses while absorbing all relevant enterprises and essential workers, equipped with PPE, receiving hazard pay and benefits, into a nationwide public health and disaster mitigation effort.

Garment manufacturers should be requisitioned to supervise the production of masks and gloves. Empty buildings and construction sites should be taken over to build hospital wards. Factories should be designated to make ventilators and oxygen tanks, and delivery and taxi companies directed to transport essential supplies.

Marxists and socialists will fight for all reforms that can at least mitigate the crisis situation, at the same time explaining and warning of the utterly temporary nature of such reforms, reluctantly granted by the bourgeois who will do anything and everything to defend the profits that keep their system going.

Modi's campaigning message about having the Hindu majority's interests at heart stands totally exposed. Migrant workers, predominantly poor Hindus from the hinterlands of India - Odisha, Bihar, UP, Jharkhand, Chattisgarh and Rajasthan have been rudely awakened to the reality of which class they belong to, irrespective of which god they worship.

What happens after the coronavirus epidemic, or when it is going to finish, is anybody's guess. But one thing is certainly predictable: nothing is going to remain the same.

Covid-19 has all the potential of revolutionising the consciousness of the working masses. That could lead to a successful struggle to free India along with the rest of the world from the deadly pandemic of capitalism.