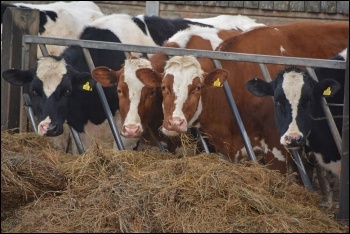 US president Donald Trump has invoked a 1950s Korean War-era piece of legislation to re-open meat processing plants, closed because of high rates of coronavirus infections among their workforces.

Many employees being forced back to work are low-paid, migrant workers on precarious contracts. It's widely reported that strict social-distancing protocols - which aren't mandatory - have not been adhered to.

About 50 workers from the Perdue Perry Cook poultry plant in Kathleen, Georgia, walked out on 23 March in protest at the unsanitary conditions inside the plant and demanding the factory was sanitised.

Police arrived in unmarked SUVs, surrounded the workers demonstration, and broke up the protest.

The average salary for a general labourer at Perdue foods is reportedly $12.66 an hour. In 2015 the Perdue family was worth an estimated $3.2 billion.

One of the country's biggest pork processing factories, Smithfield Foods in Sioux Falls, South Dakota, temporarily closed after more than 700 of its 3,700 workforce became infected with Covid-19.

It reportedly took Smithfield 18 days after the first case of Covid-19 among its workers to pause operations for 48 hours over Easter to 'deep-clean' the plant. But, the BBC reports that workers continued to operate shifts during this period.

Outrageously, the company suggested that the plant became a hotspot for the virus, not because of the lack of PPE and social distancing, but because of migrant workers' "living circumstances".

A Smithfield spokesperson reportedly said it is hard to know "what could have been done differently" given the plant's "large immigration population."

However, the AFL-CIO union federation in Sioux Falls says its officials approached Smithfield management back in March, before any employee at the plant tested positive, to demand PPE - gloves, masks, aprons, etc. Instead, it's reported that the company provided beard nets, which do not stop airborne particles.

The biggest union in the meatpacking industry, the United Food and Commercial Workers International Union (UFCW), has reported 72 deaths and 5,322 workers directly impacted by the coronavirus throughout its total membership of 1.3 million.

The UFCW is demanding PPE, social distancing and so forth, to protect workers at the reopened plants. But the union also reports that Trump's administration is providing legal protection to companies whose employees subsequently contract the virus at work.

Yet another example of Trump's deregulation of industry, designed to boost corporate profits at workers' expense.