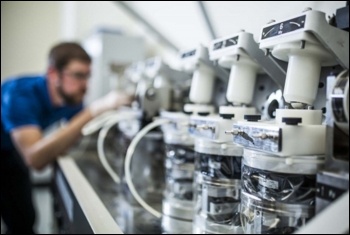 With planning, personal protective equipment (PPE), ventilators and other key products should have been easy to provide. Yet as each day goes by, the scale of the government's unpreparedness for the Covid-19 crisis becomes more and more apparent.

As reported in the Socialist, and now featured even by the BBC in a Panorama documentary, UK stocks of medical supplies were far from adequate due to long-term run-downs under austerity. And the government's unwillingness to intervene in production meant even more delays.

Three nurses photographed wearing bin bags due to lack of personal protective equipment (PPE) all later ended up diagnosed with the coronavirus. Over 100 NHS workers have died from Covid-19 so far.

So how can the shortages be tackled? One of the problems in Britain, and indeed many richer western countries, is that much of the PPE isn't produced here. Instead it's imported from around the world, including China.

To provide for everyone, global production of PPE needs to increase by 40%, according to March estimates by the UN's World Health Organisation. In the meantime, only the highest bidder will receive enough. Demand for some PPE is at 20 times the normal level, said the Economist on 19 April.

That has meant a scramble for supplies. Many countries barred exports of pandemic goods to other countries.

Some European Union member states stopped selling to others even within the bloc - a practice the free-market EU was meant to overcome. And additional barriers will have a devastating impact on poorer, neocolonial countries in particular, which have already suffered at the hands of more powerful trading blocs like the EU.

It's especially bad for those which have limited manufacturing themselves. The Economist reported some examples: "93% of Jamaica's imports of air-purifying respirators come from America; 90% of Cape Verde's face shields, protective spectacles and gloves come from the EU." This also includes Britain.

The disjointed nature of the government's efforts is due to its reliance on capitalism: on the market, which is anarchic rather than consciously planned. It is not designed to meet the needs of ordinary people, but to make profits for big business.

If there is demand for a product or service, the profit motive is meant to attract investors to fund making it. However, different capitalists then compete to make the most money out of producing and selling it.

This leads to duplication, corner-cutting, waste, secrecy, and many other problems. It also means that if no immediate profit seems forthcoming, production is unlikely to happen, making proper planning impossible.

But the lockdown has closed many normal avenues for profit. So a number of private manufacturers have indeed retooled to produce different goods, sometimes in just a few days - albeit belatedly in most cases.

Not all bosses have decided this is worth their while, however. Different individual corporate interests clash with the need for a coordinated plan of production and distribution of key supplies. This has even led some workers to walk out or protest. Those at the General Electric aviation plant in Lynn, Massachusetts, for example, demanding their factories be converted to produce goods like ventilators.

This shows that society already has the productive power to solve our immediate pandemic needs, it's just a question of how industry is organised - and who controls it. But it also shows how conversion from wasteful or harmful production to socially useful production could be achieved.

In 1976, bosses at the struggling British weapons manufacturer Lucas Aerospace threatened their workforce with redundancy. So the workers came up with an alternative. The 'Lucas Plan' would have retained all the workers' knowledge, skills and experience by retooling the plant to make over 150 socially useful products instead.

The plan was not adopted by the bosses. And today, there have been lots of reports of companies and entrepreneurs offering to provide supplies - but these aren't always the supplies we actually need.

Elon Musk made high-profile statements about supplying hospitals with ventilators in New York and California. However, the vast majority turned out not to be the 'invasive' ventilators for severe cases which are in particularly short supply. Instead, they were the non-invasive 'BiPap' and 'CPap' machines - which, in the latter case, have even been linked to spreading the coronavirus.

The Tory government's 'Ventilator Challenge' to industry apparently resulted in a number of products that clinical experts say are simply unusable. And the RAF's much-publicised PPE airlift from Turkey turned out to include 400,000 gowns which are unsuitable for use.

The Lucas workers knew what was needed in 1976. NHS and other frontline workers know what is needed today. It's the bosses who are preventing it from happening.

To guarantee the supplies we need, workers on the front line and in manufacturing need democratic control over what is being produced and in what quantities. Rather than unelected profiteers blindly competing, workers could then produce a democratic plan for production.

In Italy, a start-up which was 3D-printing back-engineered ventilator valves reportedly faced legal threats from the ventilator's manufacturer. Legal threats have also been issued between companies over patent infringements around tests. In some cases, firms have had to turn to 'clean sheet' designs that need to go through extensive testing instead.

Patents and trade secrets prevent the sort of collaboration that can lead to quick research breakthroughs even in normal times. They should be abolished and all the information made public, starting with life-saving technologies. The emergency has already forced a limited degree of this from academic journals.

The high-profile VentilatorChallengeUK Consortium was lauded for getting a new respirator through regulatory tests by mid-April. But this design was a reimplementation of a previously existing invasive ventilator, just using parts more easily sourced in the UK. It was also subsidised by a £100 million grant from the government.

But why should major, profitable companies be getting substantial public subsidies for their profits while millions of workers are struggling? Take big businesses into public ownership instead!

This would remove the legal and competitive barriers to collaborating on producing needed supplies. And the full benefit could go to society rather than shareholders' profits.

Market competition for private profit has also caused rampant profiteering and speculation. One NHS trust chief interviewed by ITV News reported 'FFP3' masks at ten times the usual price, and coveralls at £16.50 - over eight times their usual £2! The Guardian has even revealed one NHS official set up a company, Sure Stock Ltd, to trade PPE in bulk on the side.

Early on in the crisis there were also huge pressures on the supplies of food and other household goods. Some foodstuffs are still limited today in the supermarkets.

The government has even had to suspend some of the competition laws during the crisis. This allows supermarket chains, for example, to collaborate more with each other, to share logistics and ensure food supply. Why not go all the way and nationalise them?

Instead, they still maintain their own operations, their own policies, and compete with each other to boost their own profits. Hence bosses' various relaxations of social distancing in stores.

The latest example was at a Home Bargains store in South Shields, Tyneside. This led to a walkout, forcing management to restore social distancing - and claim they'd never relaxed it in the first place!

We say workplaces should be run based on the safety of workers and the public. Instead of owner-appointed managers seeking to bring in the highest revenues, elected committees of workers and consumers could make decisions to guarantee safety and fair provision in rationing policies and price controls.

These elected bodies could then be democratically linked - not just one workplace to another, but on a geographic and sectoral basis as well. This regional and industry-wide coordination could give direct input on what is needed in each community and workplace.

It could give a clear idea of what is being produced, by who, and in what quantities. This is the vital starting point for planning to match supply to need, and working out where shortfalls lie in advance. On that basis, these elected committees could allocate resources to expand production as necessary.

Nationalisation of big business would facilitate this. And nationalisation of the banks is essential too. The banks can be responsible for deciding which industries and firms grow or collapse, particularly in crises, due to their control of credit.

Capitalist governments try to leave these decisions as much as possible to the capitalists themselves. But in this unprecedented crisis, even the US Federal Reserve has had to guarantee loans to businesses rather than letting the banks decide whether to risk lending their money.

Both the private banks and the financial institutions of the capitalist state are unaccountable to workers. They are making decisions to prop up the profit system. The vast majority of the Federal Reserve's money has gone to big business, for example.

This must also be linked to anticipating future needs. For example, planning to produce a successfully tested vaccine in sufficient quantities for its rapid and widespread distribution.

In this crisis, capitalist nation-states have turned inwards. Governments and businesses seek to look after their own interests to the exclusion of others. Donald Trump even reportedly offered $1 billion dollars to a German biotech company, CureVac, for exclusive rights to a Covid-19 vaccine it was seeking to develop.

But rather than efforts by isolated companies, or even national efforts across companies, the fastest route to a vaccine is international collaboration. All research teams must be able to share all their data, and learn from all each other's setbacks and steps forward.

National and international coordination is vitally necessary in food, PPE, medicine - in fact in all production and all supply chains, particularly where goods can only be produced in specific locations.

Capitalism's pursuit of profit and beggar-thy-neighbour logic has given us a world of poverty, climate change, pandemic and economic crisis. These are issues that can be solved with the resources and capability already available in the world. But they can only be solved on the basis of putting the needs of ordinary people first - through a socialist plan of production.