One rule for Cummings, another for us

When even the Daily Mail turns on a Tory prime minister, you know the government is in trouble.

Under the headline 'What planet are they on', the Mail called for the PM's chief adviser Dominic Cummings to resign or be sacked for flagrantly flouting lockdown rules.

Scientists, bishops, ex-police chiefs and Tory MPs lined up to criticise Johnson's defence of Cummings, and to call for Cummings to go. Ordinary people who have stuck to the guidelines for weeks, often at great personal hardship, are outraged at the Tories' hypocrisy.

Week after week we have watched Tory ministers step onto the rostrum, flanked by scientific and medical advisers, and tell lies about PPE, testing and care home deaths. Now they are trying to send workers back to unsafe workplaces, and open schools more widely, even though the virus is not under control, and no mass testing and tracing system is in place.

Johnson's car-crash announcement on phase two of the lockdown inflicted a huge dent in the credibility of the government's handling of the coronavirus pandemic. Exactly two weeks later he dug a bigger hole for himself declaring that in driving 260 miles to Durham with a wife who had coronavirus, Cummings had "acted responsibly, legally and with integrity". 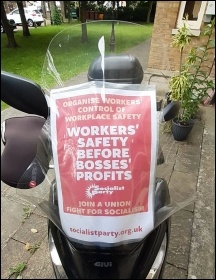 Cummings' subsequent press conference, his long-winded and incredible justification of his behaviour, will have done nothing to dispel the idea that there is one law for those in powerful positions and another for the rest of us.

The capitalist establishment will now fear that any remaining government authority will have been irretrievably eroded, and threatens the government itself. One Tory MP declared; "The PM is losing his instinct, he might be losing the plot and we could lose the country over the virus".

But Johnson could not bring himself to ditch a key figure on the right-populist wing of the Tory party, which he lent on to grab the leadership. Cummings was the main architect of the Tories' strategy on Brexit. But he was also the person who pushed hard for the reckless initial 'herd immunity' stance on Covid-19, which resulted in a delayed lockdown and thousands of needless deaths.

More evidence of Cummings' blatant rule breaking could emerge over the next few days. The dual pressure of a fearful establishment and public opposition could yet force Johnson to act against Cummings to try and save himself and his government.

But with the Tories on the ropes, now is the time for workers and the trade unions to go on to the offensive; stand firm, fight for PPE and mass testing, and refuse to work in unsafe workplaces; demand that the furlough scheme remain in place as long as necessary with 100% pay; oppose all redundancies and demand that any company threatening to sack workers be taken into public ownership; put pressure on councils to refuse to make cuts and demand the government fully fund public services.

It's clearer than ever that we cannot rely on a Keir Starmer-led Labour Party to fight for the interests of working people. More concerned with burnishing his pro-establishment credentials, initially he merely called for an enquiry into Cummings' behaviour. It was only the day after Johnson's speech, when the overwhelming opposition to Cummings and Johnson's backing of him became clear, that he came out and said he should resign.

Not only Cummings but the whole Tory government must go. Their incompetence and ineptitude in the face of the coronavirus crisis, flowing from their desire to prioritise the profit needs of their big business backers, has cost thousands of lives, and their policies for dealing with the economic crisis will do the same.

A new mass political alternative is needed that puts the needs and interests of the working class centre stage. To that end, the Socialist Party, is proposing that representatives of the left-led trade unions, and socialist activists inside and outside the Labour Party, come together to debate how to set about building such a workers' party.

In the meantime, workers' action in schools, in the transport sector, in Royal Mail and elsewhere, can not only defend the safety and livelihood of workers, but also build confidence in the importance of collective workplace action, which can in turn be carried over into political struggle.