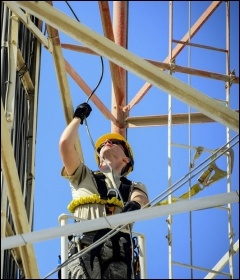 The last five years has seen an average 36 construction worker deaths each year. According to the Office for National Statistics, in just four months of Covid-19 there have been 199 deaths!

Despite this, the government has told construction workers it's now safe to return to work and ignore the minimum two-metre distancing rule, as long as it's limited to 15 minutes. Anyone who has set foot on a building site for five minutes would know that this would not be possible.

The Unite union has said this is unacceptable, and advised members to contact them immediately if they are asked to work in a way that would threaten their health and safety - which the '15-minute rule' itself does.

But Unite should also demand each site is investigated by workers and union reps to check its safety before any return to work. This way workers are more likely to stay safe, and will be acting collectively, thereby raising their confidence.

Unite also says the employer is responsible for the health and safety of workers as soon as they leave their homes to go to work. But building workers often travel together in one car to reduce petrol costs and its more eco-friendly to their place of work which could be 30-50 miles away!

Based on the new 'laws' they would need one driver, one in the boot and another strapped to the roof, or they could stop every 14 minutes to get out of the car and stand two metres apart - for how long no one knows! Others are picked up in company vans with up to 16 workers inside!

In the 1970s, construction company bosses went into overdrive to push workers into sub-contract labour as a method of splitting their union Ucatt (now part of Unite) after its first ever national strike had won a significant pay increase.

The Unite leadership should, along with making sure their members have full control over health and safety on all known sites, be carrying out a recruitment drive to gain new members, whether they are officially employed or sub-contractors.

The Covid-19 crisis has demonstrated in action the effect that workers not working can have on this so-called strong government. In reality, workers have experienced elements of what a general strike would look like, and in particular have been given at least a glimpse of the potential power that we have.

We need to put maximum pressure on all trade union leaders, including the Trade Union Congress, to mobilise from our 6.4 million members to fight with strike action when necessary against the inevitable attempts by this government to make workers pay for their Covid-19 shambles.