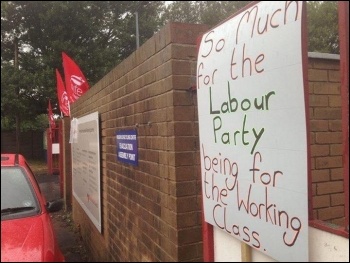 Tackling the coronavirus threat is the most pressing problem facing working people. Unfortunately, with a few honourable exceptions, we have to take up that fight without the benefit of a combative national leadership in either the trade unions or the Labour Party.

Hull Trades Council, the body representing local union branches in the city, held a very successful public meeting on working-class political representation on 14 May. There were many new faces, as well as Labour Party activists.

Steve Hedley, senior assistant general secretary of transport union RMT, was scathing in his criticism of both the Tory party and Keir Starmer's Labour. He emphasised the vital role of the trade unions, and how unions must try to recruit among low-paid and zero-hour workers.

Mick Whale, chair of the trades council and Socialist Party member, agreed with Steve - but argued that alongside the unions, we need a political party that can represent workers. That party is not now the Labour Party. We need to work towards a new party that will be democratic and accountable, campaign against cuts and privatisation, and fight for socialist policies.

Joe Solo, a singer and entertainer, got a fantastic response when he spoke from the heart. "Workers have not deserted the Labour Party, the Labour Party has lost contact with them."

It was clear that many Labour members are very critical of the direction the party is taking after the election defeat, and are weighing up where their political future might be. We agreed that the trades council would act as a forum for debate on this issue in the period ahead.

The officers of the trades council also agreed to coordinate a car cavalcade protest with the RMT against the announcement of mass redundancies at P&O ferries.