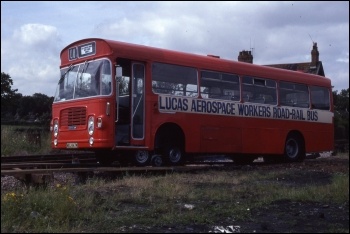 The prototype of the Lucas Aerospace workers’ bus that could switch between rail and road, photo Gillett’s Crossing/CC   (Click to enlarge)

The announcement by Rolls Royce of 9,000 redundancies in its aero-engine business is one of many likely threats of job losses in the coming recession.

Is there an alternative? Instead of hundreds of thousands of workers being made redundant, couldn't production instead be switched to socially useful goods?

This is not a new debate. When workers at Lucas Aerospace, a company with sites mainly in the North West and the Midlands then making electronic systems for missiles, were threatened with mass redundancies in the mid-1970s, they developed an incredible, viable, alternative plan of production. They worked out that their skills and production lines could easily be adjusted to manufacture products far more useful to humanity, and far more beneficial to their communities, than weaponry.

It is important to reexamine this period and the plan that the workers developed, especially considering Covid-19. We have urgently needed to switch production speedily to make ventilators, PPE, and other lifesaving equipment. But government and businesses in Britain have been ineffective and unwilling to meet the vital needs of our society, much to the anger of the workforce.

In the early 1980s, the 'Lucas Plan', as it has come to be known, was still being discussed widely as part of the debate on nuclear disarmament and how to protect jobs. The debates were instrumental in my political education at the time. As someone gaining a deeper understanding of socialism, it highlighted to me the ingenuity and power of the working class in planning for the needs of society, while greedy bosses put profit before people.

The Lucas Plan has an even sharper focus today. With the threat to people and our planet from the impact of climate change, we need to invoke the campaign of those engineers who produced the plan.

In the 1970s there was a wholesale deindustrialisation of Britain. It swept away hundreds of thousands of jobs. At a stroke of a pen, companies laid off workers onto the 'dole'.

This was not the 'normal' capitalism with periodic 'booms and slumps'. This was structural deindustrialisation. Huge international 'titans' of capital sought ever greater profits, leaving in their wake communities destroyed.

Whole factories were closed with production moved to other countries. Workers were sacrificed and replaced with increasing amounts of automation and other technology.

Time and motion studies squeezed every minute of the worker's day. The stopwatch was king. The increased use of machines and automation robbed skilled workers of their pride.

Lucas Aerospace was a big conglomerate. It had 17 factories across the country with 18,000 workers, many of them skilled engineers. They produced a variety of products including guidance systems for missiles.

While the company did not hesitate in taking decisions centrally, trade unions were organised separately at different factories and in 12 different manual and staff unions. To act in a united way required a different trade union structure (many of those unions later amalgamated to form larger, general trade unions like Unite and GMB)

To help fight back, union convenors formed the Lucas Aerospace Combine Shop Stewards Committee. Whereas before they were fragmented and could easily be picked off and set against each other, now they could speak with one voice and collectivise their concerns in a democratic way.

The 'combine' of joint unions started to organise to defend jobs. With left-wing MP Tony Benn as the Labour industry minister in 1974, the workers appealed to the government for support, hoping that it might look at nationalisation.

Tony Benn suggested that they produce a plan that they could put to the government to argue their case. That is how the Lucas Plan started.

The plan they produced was ground-breaking. Over 150 ideas for socially useful products in six volumes, all with detailed technical plans for production, were published.

The main aim was, of course, to save jobs. But it was more than that. They also wanted to save human skills and add human value. As one said:

"If we don't make things that kill people, we can produce products that enhance people's lives and save lives." These were some of the best engineers who considered products that could change the lives of ordinary people, like their families.

The other challenges they set themselves were that they should not waste resources, that their work should be 'non-alienating', and organised to encourage human creativity and enthusiasm.

This is what workers' control of industry can bring and it is even more crucial in the 21st century.

One of the Lucas engineers had experience already of the intransigence of the company to look at alternative products. He had designed a cart to support the mobility of children with spina bifida. Such was the success of this design that orders for 2,000 were obtained, only to be turned down by the management as it did not meet their 'product pattern'!

The plan that was developed by the engineers was astonishing. Products were designed in detail, many with working prototypes. The ideas flowed from the team; they looked for solutions to ease the lives of the most vulnerable in society such as a heat exchange to provide cheap heating for the elderly and more deprived communities. Cold is still a big killer of older people. Just as we have seen with Covid-19, capitalism fails to protect our most at-risk communities! Portable kidney machines were designed, along with other potential life-saving medical products.

They also designed and developed a hybrid car, using a petrol engine to charge a battery. This was 1976! If it had been properly developed and produced, just think how much carbon could have been reduced over the last 40 years.

Wind turbines and solar cells, producing clean energy, and a rail bus that could switch between rail and road which worked, were also designed.

Just consider if the workers had been supported and these products had been developed. The skills and talents of workers, rather than crushed by capitalism, could actually be harnessed and used for everyone's benefit. This gives a taste of what could be achieved under socialism.

This plan promoted much discussion in the trade union movement about how to achieve 'workers' control'. Coventry TUC, along with three other trade union councils wrote a report on workers' control setting out the arguments and a strategy.

Another major report in 1978 from car workers at Chrysler, Vauxhall, Ford, British Leyland and Wilmott Breeden, suggested socially useful alternatives to the mass-produced car. From public service vehicles to specially adapted ones for those with disabilities, from cross-country vehicles (building on the Lucas road-rail prototype) to hybrid vehicles and alternative fuels.

These same arguments are now relevant in the discussions in trade unions around the nuclear industry and the need for a million green climate jobs.

The workers at Lucas faced a major obstacle which ultimately defeated their plan: they never collectively controlled their company. But their plan has continued to ignite ideas in a new generation, to inspire them to join the fight to win a socialist society and change the world for good!