Going viral - Socialist comments and letters on the corona crisis 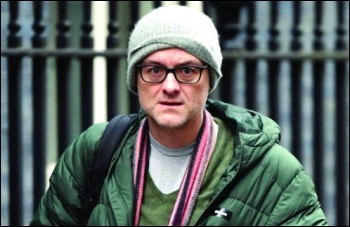 Readers respond to Boris Johnson's power behind the throne, Dominic Cummings, and his incredible defence of twice flouting his own government's social distancing rules with family trips to County Durham.

In London, a city of nine million, Cummings, the top advisor to the UK government, just 'couldn't get help'?

Truth: Cummings and Johnson's policy of 'no to social distancing' and 'yes to herd immunity' saw the R number rocket and deaths spiral in London! Cummings did a runner, fleeing the city, while Johnson shook hands and had to take up a Covid-19 bed.

Cummings' trip to Barnard Castle - on his wife's birthday - wasn't a day out. Oh, no. He just needed to take the wheel to test his eyes out! Once tested - having put everyone in danger on the road - his wife took over the wheel, and they returned to London! End of fairy tale.

Would it not be better if Cummings was made PM rather than having to work through B Johnson?

He has lied about everything. He (and Downing Street, for that matter) even had the gall to state the police did not speak with him regarding this matter when they very obviously did, with several officers able to recount the conversation they had with Cummings and his family. It's a clear example of "do as I say, not as I do."

I am actually really blazing mad about this. We have all had to abide by strict regulations for weeks. The overwhelming majority of people have accepted these regulations in the hope that our actions will flatten the curve and help protect lives - not to mention save the already incredibly stretched and underfunded NHS from being completely overcome with patients.

So many of us have had to take care of young children or elderly and vulnerable relatives. Others have been furloughed or lost their job. Many, myself included, have returned to our workplaces, fearful that social distancing will not be possible.

Every time I travel by bus into work, I am terrified I will contract this dreadful illness and transmit it to my family. I am trying to isolate as much as possible at home so I can minimise the contact I have with my parents.

This week I've been on leave, and it's the first time in almost six weeks that I've been able to spend proper time with my parents despite living in the same house. This is the reality for so many across the country.

The sheer arrogance of this sorry excuse of a human is absolutely infuriating. How dare he and all the rest of this government of complete charlatans try to justify this when workers and our families have been thrown to the wolves?

Dominic Cummings travelled 250 miles with his family to Durham to stay with his parents while potentially infectious with Covid-19. It's not just Cummings, though.

Yet ordinary people are fined for lingering in a park alone or cycling too far. Clearly the Tories cannot be trusted to protect the public.

And anyway, Cummings couldn't have been in Barnard Castle, because he was at a Pizza Express in Woking! This is distinctly memorable because it was very unusual for him to visit a Pizza Express, especially one in Woking. Witnesses say it was miraculous to see him devour an entire American Hot without breaking a sweat!

Freudian slip by the BBC presenter on 25 May when he said that Johnson stated Dominic Cummings had acted "irresponsibly, illegally..." He then gave Johnson's actual quote, but the slip was more accurate!

So the Cummings family 2020 Covid Rodeo continued on a romp to nearby Barnard Castle, in the region of the UK worst devastated by the coronavirus. No bother. It's all good. My partner and I, and our health and social care colleagues, really aren't troubled by the destruction and misery wrought on the North East as we toil away with death omnipresent in our daily lives.

Cummings and goings all day long, it appears. Another revelation and he could be gone as Johnson's adviser. But it's the whole Tory cabal we need to see the back of - and their reckless Covid policies that sacrifice tens of thousands of lives for profits.

Government statements increasingly resemble the ramblings of Donald Trump's "campaigning" media! A 13-year-old dies alone in hospital, as do countless elderly patients. One elderly woman, having been sent home from hospital a day after her husband dies, died alone.

Yet a government advisor is exempt. One law for the rich...

As most Tory frontbenchers try to excuse Dominic Cummings' disregarding of lockdown laws, some on the Tory backbenches break ranks and demand his resignation. With EU negotiations needing to reach a meaningful agreement by June to avoid a disastrous no-deal Brexit, these divisions in the Tories will only worsen.

If Dominic Cummings can ignore the government, then teachers and parents should do likewise, and refuse to return to schools on 1 June.

Cummings must go, and go now!

How to spread a virus in a small country like Scotland, by the SNP government.

Learn about an outbreak at Nike's international conference in mid-February in Edinburgh. Keep it secret, and stop contact tracing and testing on 12 March.

Move elderly patients from the Govan super-hospital - despite having enough bed capacity - across the city to Gartnavel. 25 of these patients die as over 80 are infected. Discharge 1,000 hospital patients into care homes in one month, without testing them.

It's good the Welsh government has not followed Johnson off the cliff and announced the reopening of schools in Wales in June. But don't sit back and think they've done all that's necessary to keep us safe.

Virus reproduction rates in Wales are among the highest in Britain, thanks in no small part to reckless private companies like EE dragging as many employees as they can get away with back in to work.

The Welsh Government should give trade unions the power to determine whether a workplace is safe to reopen - or the unions should take that power themselves.

As the lockdown continues, it's not so much the football I am missing but the sense of solidarity. Last weekend I should have been at Wembley cheering my team to promotion alongside 90,000 fans, but that can wait.

There are more important things now. You can't visit relatives, friends have been critically ill, and the bosses' attempt to bludgeon us back to work must be resisted.

When football does resume, it must do so safely. But what sort of football will it be, and when? Club owners have spent weeks squabbling, with their conflicting commercial interests, over how to end this season - let alone start next season.

It is unclear even whether it makes commercial sense for some lower leagues to resume next season without fans present. And so some owners, many of whom are multimillionaires or even billionaires, push the case for a bailout.

Let us be clear: they might be the legal owners, but the fans are the moral owners. While I have supported my club, it has had at least a dozen different owners. Mostly they have been short-term, seeing if they can make a quick buck and then sell on.

No bail out for the multimillionaire owners. If clubs are in financial difficulty, and this is highly likely, any public funds should be for community ownership of clubs - clubs run democratically by elected fans, staff and community representatives, for the benefit of the local community.

No return to 'normal'

We don't want that 'normal', so they can take it and shove it where the sun don't shine. Let's get organised and fight back! The new normal can't be the old normal that failed the majority of us!

You gotta laugh, Justine Greening banging on on Newsnight about libraries complimenting education. Well, that's what they did do, before your party closed them all!