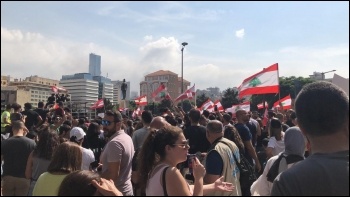 In Lebanon there's been the biggest movement of opposition to the government for at least 14 years, since the previous 'cedar revolution'. Lebanese flags have flown on the protests rather than those of sectarian militias, photo Shahen Books   (Click to enlarge)

After a pause for a little over a month with the Covid-19 lockdown, new protests have erupted as the situation for ordinary workers in Lebanon has become desperate.

Unemployment has reached 30%, while hyperinflation seems to be developing, with 70% increases in the price of sugar, and a doubling of the price of vegetables. The Lebanese Lira's official exchange rate to the dollar is 1:1,500, but that is now a complete fiction. In January, black market rates were 1:2,500, and are now reportedly over 1:4,000!

Lebanon, so far, has had few officially recorded deaths (26) from Covid-19, and just over 1,000 cases officially confirmed. But a recent increase in cases has provided the grounds for a new intensification of the lockdown measures.

Lockdown measures require social support and workers having the material means to abide by them. The situation had become so desperate that, from the end of April, sections of the population began to take to the streets.

Some of the most oppressed workers have taken strike action, including mostly Bangladeshi and Indian migrant workers at private waste-management company RAMCO. Al Jazeera reported that the company - with arrears of $8.7 million from the government - cut workers' pay from $300 to $100. A strike started on 3 April, escalating with a blockade of the company's main facility on the outskirts of Beirut on 12 May - with at least 250 out of the 400-strong workforce remaining out on strike.

Banks have been the focus of protests, with a number destroyed, as well as roads blockaded and car convoy protests. In the words of the Financial Times: "The Lebanese army said it had responded to threats to private property in the city after a number of bank branches were set on fire."

In Tripoli, in the north of Lebanon, one protester, Fawaz Al-Hamman, was shot dead by the armed forces, dubbed by the thousands of mourners who turned up for his funeral as the "Martyr of the Hunger Revolution."

A video on the Guardian website shows a rally outside Al-Hamman's mother's home with chants of revolution. Other revelations have been made of protesters being tortured under arrest by the army in Sidon, a port in the south of the country.

As one woman quoted by Al-Jazeera commented: "The army are not our brothers. They are shooting us to protect the politicians."

This new wave seems to be an even poorer and desperate layer, forced onto the streets, preferring to risk catching Covid-19 than doing nothing in the face of starvation. The government has failed to provide any of the aid it promised to workers. Indeed, videos of a protest have appeared showing protesters and police arguing about who is hungrier!

As one protester quoted in the Washington Post said: "We stopped the revolution because of corona..." But now, he said, "bankruptcy is coming. Hunger is coming. Of course we're going to rise to change the whole of the political class."

Last year's movement was significant in a society deeply divided along sectarian lines. These were cut across in the course of the movement that was opposed to all the sectarian parties and politicians. As we have commented previously, "For 'All means all' to come to fruition, the sectarian constitution, which is the cornerstone of this horse-trading, has to go. The movement must fight for the convocation of a genuinely representative constituent assembly, but this in itself is not sufficient. Unless a non-sectarian workers' party is built, then these same parties, representing the interests of big business, will continue to dominate." ('Lebanon - mass protests cut across sectarian division' - socialistparty.org.uk).

Indeed, unless such independent workers' organisations are built, the vacuum that currently exists could be again filled by sectarian forces. As the Economist comments "...the country's crises are giving its factions a new lease on life, as the state struggles to provide help. Hezbollah, the Shia militia and political party, has its own fleet of ambulances and more than a dozen Covid-19 clinics. Every party is vaunting its efforts to treat patients and distribute food and cash. Some even hand out surgical masks emblazoned with their logos."

Such independent workers organisations need to be armed with a programme to deal with the impending catastrophe facing the masses in Lebanon. A starting point should be: repudiating the foreign debts, and nationalising the banks and the financial sector.

Capitalism has served up nothing but war and devastation to the Middle East, and the Covid-19 crisis will only deepen this, impoverishing workers and the middle classes even further. The new waves of struggle that will emerge against this backdrop need to sweep away not only the sectarian division fostered by capitalism, but the whole rotten system.

In its place must be socialist measures of a democratic plan of production to meet the needs of the masses, based on bringing the key sectors of the economy, and the wealth they produce, into public ownership under the democratic control of workers, as part of a socialist federation of the region.

In his masterful History of the Russian Revolution, Leon Trotsky makes the point that revolutions start at the top when the ruling class cannot continue to rule in the manner it previously did.

Significant splits in Lebanon have opened up between the prime minister, Hassan Diab, and the governor of the central bank, Riad Salame. These are over who is to blame for the perilous financial position Lebanon is now in, and how to reduce the county's debt, or more precisely, how to make the Lebanese working class pay for it.

This split includes the recently announced forensic auditing of the central bank. This audit is undoubtedly designed to produce scapegoats in that institution for the financial Ponzi scheme of borrowing increasing amounts of dollars on the promise of high returns that kept the currency peg to the dollar stable.

Indeed, some banks, as the Economist reports "...are still pursuing outlandish schemes to raise capital. One recently offered to double the amount of any fresh dollar deposits (9/5/20)."

But perhaps the key disagreement is over exactly how some of the debts can be reduced, with the government's emphasis being on a 'bail-in' or haircut for investors.

The Lebanese banking association has opposed this, particularly on the grounds of "violating private property". The talk of floating the Lebanese Lira in relation to the US dollar, will wipe out the value of savings denominated in the Lira.

The International Monetary Fund (IMF) aid that the government has now formally applied for has strings attached in terms of long held-back 'reforms', such as phasing out electricity subsidies and cuts to wages and state jobs.

Diab undoubtedly fears that a plan to clear the debts solely consisting of implementing such attacks will provoke even deeper resistance, much like the announcement of the WhatsApp tax last October led to a huge protest movement that swept his predecessor away.

Nevertheless, the austerity measures included in his plans could still do that. The government's own forecasts are of a 53% jump in consumer prices this year. The IMF predicts GDP (total economic output) will drop by 12%, while the World Bank predicts the numbers of Lebanese living in poverty will reach 50%.

This devastation of the lives of working-class people in Lebanon will provoke more and bigger revolts. Consequently, in order to take the heat out of the situation, the Lebanese government has now announced subsidies on basic foods.