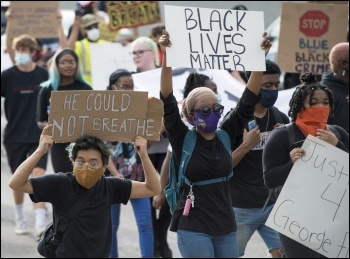 State oppression and class inequalities, exacerbated by the pandemic, have led to an explosion of anger in US cities photo FibonacciBlue/CC   (Click to enlarge)

Tens of thousands of protesters have taken to the streets of dozens of US cities - and internationally - following the brutal murder in Minneapolis of unarmed black man George Floyd by a white cop.

The uprisings by oppressed communities, including many young people, is more intense and widespread than protests following the killing of black 18-year-old Michael Brown by a white cop in Ferguson in 2014. Indeed, commentators have likened today's protests to the uprisings which occurred after the assassination of black civil rights leader Martin Luther King in 1968.

Jai Chavis and Nicholas Wurst from the Independent Socialist Group (US) - co-thinkers of the Socialist Party in England and Wales - explain in the following article why the political establishment and the profit system it represents cannot end racism and exploitation, and why building a powerful working-class movement with socialist policies is the only way forward.

On 25 May, police in Minneapolis choked George Floyd, an unarmed black man, who subsequently died. His death was disturbingly reminiscent of the NYPD killing of Eric Garner in 2014. A released video recorded by bystanders shows Floyd repeatedly pleading, "I can't breathe", as officer Derek Chauvin crushes his neck for nearly ten minutes.

Floyd's death ignited days of major protests in Minneapolis, which, at the time of writing, are continuing. Police escalated the conflict by firing rubber bullets, flashbangs, and tear gas to disperse initially peaceful protestors. Trump tweeted in favour of the military firing on protesters stating: "When the looting starts, the shooting starts".

This violent response to unarmed protestors stands in stark contrast to the hands-off and non-confrontational pattern of police response to heavily armed and predominantly white 'reopen' protestors.

Chauvin is not an isolated 'bad apple' - he is part of a corrupt and racist system. And the Democratic Party politicians who run Minneapolis have failed to take meaningful action against police brutality and mass incarceration, for years.

Democratic Vice-Presidential hopeful, Amy Klobuchar, was the chief prosecutor of Hennepin County - which includes Minneapolis - for an eight-year period. During her tenure, she failed to press criminal charges against any of the officers involved in 29 civilian deaths, and instead chose to prioritise a 'tough-on-crime' stance to shore up support among more conservative Minneapolis residents.

George Floyd's death comes after recent high-profile killings of black people by police and right-wing forces. Breonna Taylor, an unarmed black woman and Emergency Medical Technician, was shot dead in Kentucky on 13 March by police who entered her apartment in a 'no-knock' raid.

It is crucial that BLM, or any new banners that may emerge in the current moment, apply the lessons of the civil rights movement and BLM's own recent history.

The 1960s civil rights movement made the crucial mistake of relying on the Democratic Party, turning the movement in the streets - which won huge gains - into a surge in the polls that elected Democrats to power.

Many leading Democratic Party politicians have histories of racist policy making. Hillary Clinton was an architect of the 1994 crime bill that expanded racist policing and facilitated modern mass incarceration. Presidential hopeful, Biden, actively opposed desegregation of schools and was an ardent supporter of Clinton's 1994 crime bill.

The racist policies implemented by the Democratic Party set the stage for the 'tough on crime' rhetoric that Trump relies on today to support his racist policies and shore up his conservative base. Trump and the Republicans have set a racist tone in their propaganda, and by pushing mass incarceration, police brutality, and anti-immigrant racism through expanding brutal ICE (Immigration and Customs Enforcement) raids, and mass imprisoning of immigrants.

Both parties use appeals to racism - more or less well-concealed - to play on, and play up, the racial fears of many white voters. In reality, racism doesn't benefit white workers. The capitalists secure their huge profits by convincing working class people to fight among themselves, whether through racism, sexism, or any other form of bigotry.

By blaming white, black, immigrant, male, or female workers for each other's problems, the capitalists can continue to exploit us, drive down wages, privatise public services, and lower living standards.

As Malcom X famously declared: "You can't have capitalism without racism." Capitalism is a system built off the backs of slaves and the genocide of indigenous peoples. It will not end racism of its own accord. We need a new party run by and for working people, free of corporate influence, that can dedicate itself to fighting against all forms of bigotry, and against capitalist exploitation. Such a party could help build a fighting anti-racist movement out of the recent protests.

With an organised movement, involving the unions and a workers' party, we can redistribute housing, food, and basic needs by nationalising key industries and fully funding social programmes.

The pandemic has put on full display the fact that workers are 'essential' in making society run. This means we also have the power to shut down capitalism and rebuild a society that puts people's wellbeing before profits.

The first step is to involve the organised working class in anti-racist struggle. Unionised workers should pass resolutions in support of the movement - as ATU local 1005 has done in Minneapolis - and organise anti-racist protests, rallies, occupations, and strikes.