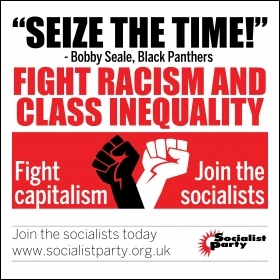 This massive explosion of anger didn't just emerge out of nowhere, out of a vacuum. The spark that lit the fuse was the horrific murder of George Floyd by racist police in the US. But this new movement also represents a fightback against all the racial injustice that hasn't been caught on camera, or has just been swept under the rug by the establishment politicians.

Here in the UK, we have seen an outpouring of working-class black and white youth from the estates and inner cities taking leading roles in the protests and marches. The call is for justice for all the black lives lost at police hands.

And it is also for justice for all those who are still suffering from Grenfell; justice for the Windrush generation at the sharp end of the Tories' 'hostile environment'; justice for the BAME people dying from Covid-19 due to lack of PPE on the front line in the NHS, care homes, and other key workplaces, and because of the poverty, inequality and racism generated by the capitalist system.

At protests we have seen working-class youth making speeches about how they want full justice in society, free from the oppression of systemic racism, joblessness, homelessness, and a society with no future prospects.

At one of the big huddled masses in the several thousand-strong protest in Birmingham, there was a roaring response of support when Socialist Party members called out the hypocrisy of big business trying to shield themselves with PR campaigns of tokenistic gestures of 'corporate solidarity' - turning their social media logos black, or shining lights on their properties. Big businesses like Amazon with large black workforces being exploited in dangerous sweatshop-like conditions.

The hypocrisy also includes local Labour councils shining lights 'in solidarity'. Black workers and youth at the protests said they are more concerned with 'being able to keep the lights on in our own homes' than council spotlights!

The establishment politicians, Tory and Labour, have decried the toppling of a statue of a slave trader. These are the same politicians who are looting working-class communities by cutting public services, including mental health, and jobs and homes.

The mood at the protests is not apolitical. The system of capitalism itself is targeted for removal - to eliminate its divide and rule tactics. We've seen black and white youth quoting Malcom X, Martin Luther King, Fred Hampton and others: for a joint, working-class, multiracial fightback against all the social and economic injustices this system breeds.

All these black leaders were advocating, or moving towards, a socialist solution to the racism and class inequality of this rotten system. For a new generation of black and white youth awakening into struggle, those socialist ideas are more relevant than ever.