Editorial of the Socialist issue 1090 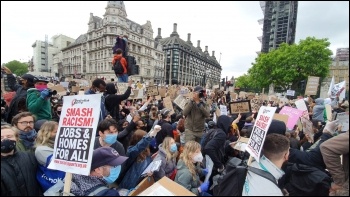 "We have outgrown you, despite your best efforts to keep us in the same place. You are in power, but you are outmoded. You're the old form of human. And the new form is coming for your neck."

These words from musician El-P point to the hopes of the new working-class youth movement being born. To smash racism and the class inequality that together press on the necks of young people, this movement must organise and draw all the lessons and ideas from the movements that have gone before; the slave revolts that led to the abolition of slavery; the civil rights movements, the struggles against the fascists in Britain, and many more.

Ultimately, these struggles show that leaving the power to run society in the hands of the existing rulers, the boss class, is to condemn us to having to keep fighting racism. And that mass, united, working-class action and organisation, around a programme of anti-racism and anti-capitalism, to fight for socialism, with the working class taking power, is necessary.

The brutal murder of George Floyd by Minneapolis police has sparked a phenomenal worldwide anti-racist movement. In the US, these are the biggest protests in history. In Britain, the Tories' official figures estimate that 137,000 people have participated in protests over the last week since 31 May. But Socialist Party members estimate that over twice that number have been present on the 35 Black Lives Matter (BLM) protests we have supported.

These have been the biggest protests in some of the towns and cities for years or even decades. Waves of courageous young people have poured onto the streets to make their voices heard in a sea of human solidarity. In many areas, but not all, the majority are black. But in all areas it is working-class young people who dominate these protests - serious and determined to unite in opposition to racism and inequality.

The murder of George Floyd was the trigger but the issues go far beyond that. The protests have demanded justice for many of those murdered by police or in prison in the US - but also in the UK: Rashan Charles, Edson da Costa, Mark Duggan, Sean Rigg, to name only a few; but also for Belly Mujinga, a rail worker who died from Covid-19 after she was denied PPE and safe workplace arrangements by her employer.

Police racism is a major mobilising issue. Police stop and search disproportionately targets black people. We need police accountability through democratic control by working-class communities, including the youth as well as the trade union movement. Who else could be trusted to make decisions about policing?

However, the police presence has largely been minimal on these protests. There have been attempts to use both health fears and law and order issues to undercut support for the movement. But the Tories already enjoy very low levels of support and trust, and cannot explicitly attack anti-racist protests - a reflection of the widespread solidarity that exists.

They have not been able to use the corona laws to stop fearless young people joining these protests. That is not to say that Covid is not taken seriously - masks and gloves are worn by almost everyone, and distributed free of charge. This is more than the Tories can manage in the care home killing fields they have created.

But these protests cannot wait until the Tories grant permission for resistance and solidarity. As they developed, the recent youth movements in Chile and Hong Kong showed young people losing their fear as the necessity of fighting back was revealed.

The toppling and dumping of the statue of slave trader Edward Colston in Bristol has been jumped on by Tories and the right-wing press to try to conflate the protests with alleged 'criminality' and undercut their support.

Colston shipped an estimated 84,000 people from Africa to the US as part of the establishment of capitalism there. The best monument to replace that outmoded relic is a movement to end capitalist oppression and exploitation.

This is why the slogan, "the UK is not innocent" has been taken up. Many young people recognise the need for fundamental change in the running of society.

Their future is under threat of being sacrificed for capitalist crisis, just as their childhood has been, with the slaughter of youth service and youth clubs, the trebling of university fees, the insecurity of zero-hour contracts and the lack of council homes and rent control. Capitalism means crisis - it is this system that is outmoded.

The Grenfell tragedy, Windrush, the treatment of refugees, institutional racism, austerity, inequality, low pay, university fees, and of course Covid-19, especially how capitalism's inequality has made BAME people vulnerable to the virus, were among the issues discussed and chanted about.

Coronavirus has revealed all the brutal truths about capitalism - showing how big business bosses and their Tory representatives prioritise profits, and are therefore utterly unable to keep society safe, while workers have been shown to be the ones keeping society going and defending safety.

As yet, this movement is not organised and has no democratic structures to discuss a programme of demands. But the issues motivating working-class young people are so huge and far-reaching that the movement cannot disappear, even though the initial protests might ebb for a period.

The absence of any organised political voice in support of these protests other than the Socialist Party has been noted. We have been welcomed, running out of leaflets although we printed tens of thousands in the time we had to prepare, so that we could contribute to the necessary discussion on how to take the struggle forward. Almost 1,000 protesters have bought a copy of the Socialist newspaper, and even more have signed up to say they want to find out about becoming a member.

The Labour Party leadership has been absent from the protests and from giving its support.

Bristol protesters have correctly pointed out that they had to remove the Colston statue because of the failure of the council, or the first elected black (Labour) mayor, Marvin Rees, to carry out this necessary removal.

Rees said that although the statue had been an "affront" throughout his life, he could not "condone criminal damage".

The criminal damage to life done by Colston and the ruling class he represented as a Tory MP is what this movement cannot condone - it had to act.

The Tory Party exists to defend capitalism with all the cold cruelty that means - from slavery, to austerity, to Covid failures.

Labour leader Sir Keir Starmer told LBC radio: "It shouldn't have been done in that way, [it was] completely wrong to pull a statue down like that." With this comment, and also in his approach to Covid, he has shown that he is not prepared to stand up for working-class people and defy the Tories - in bronze or in parliament.

The movement will have to build its own leadership through a testing of ideas and organisation as it develops. London Labour Mayor Sadiq Khan hopes to gain influence by ordering reviews into racist policing and racist statues - there are a lot of both. This shows the potential strength of the movement to push for change.

But Khan is no friend of working-class young people, having just cancelled free bus travel for under-18s because the Tories demanded it. He does not have the courage of this movement.

To be on the side of this movement means drawing on the conclusion of Malcolm X and the Black Panthers: "You can't have capitalism without racism".

What does that mean for building the Black Lives Matter movement? It means building a mass united movement of working-class people with anti-racism at its heart; that fights for workplace safety and PPE for all who need it; for fighting trade unions; for free education; for democratic working class control of the police, and for a future for all young people. It means building a new mass party of workers and young people because we can't trust the capitalist politicians with our lives and our future.

And it means fighting for the alternative to capitalism - socialism. Capitalism is outmoded. It can't offer us a future. Join the Socialist Party to help us raise these ideas in the new movement.