Young people and workers have protested across the world. In France, an inquiry verdict on 29 May cleared three gendarmes (military police) of killing 24-year-old black man Adama Traoré. Gauche Révolutionnaire, the Socialist Party's sister party in France, reports on the situation. 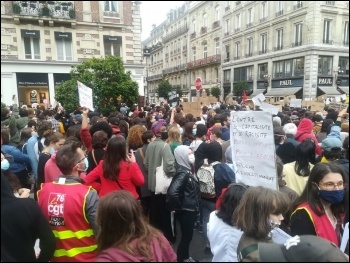 20,000 people rallied in Paris on 2 June to demand #JusticePourAdama, to fight against racism, and in solidarity with the movement in the United States.

The lockdown has made us witness to appalling situations. It's in the areas which are already the poorest and most vulnerable where the repression, restrictions, and €135 fines have been harshest.

Encouraged by the authoritarianism of President Emmanuel Macron and his interior minister Christophe Castaner, the police had ramped up their abuse and racist actions against the youth and wider population. We learnt with fury on 29 May that the pseudo-medical experts had dared to deny that Adama Traoré was killed by the chest-kneeling which asphyxiated him in July 2016.

Following the mobilisation, the government has had to formally ban the strangling technique, and claim it has always had a "zero-tolerance" policy on racism. Prime Minister Édouard Philippe has also had to suspend some police officers after Facebook groups of 8,000 and 9,000 cops were found to include hyper-racist discussions.

As the Socialist went to press on 9 June, a second rally in homage to George Floyd and against police racism was due to take place.