No return until its safe 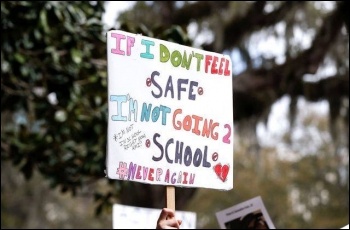 The Welsh government has announced a return to school for all students in Wales on 29 June. This must be opposed by all unions in Wales. No teacher, teaching assistant or school worker must be forced back to work in unsafe conditions. There must be no return to work unless it meets the 'five tests' laid down by teaching unions.

A premature return to school risks the safety of pupils and teachers, especially those with vulnerable relatives, and a new upsurge in Covid cases in our communities. The Welsh education minister, Kirsty Williams, has said that one-third of students at a time will be in school. But this is still a dangerous gamble with the lives of parents, children and teachers.

"That means that the teacher will have contact with every single child in a class of 30 plus. They are even more likely than teachers in England to come into contact with the virus, and then pass it on to the other children and indirectly to their parents" said one primary teacher when she heard the announcement.

National Education Union Cymru (NEU Wales) pointed out that the R rate in Wales has not decreased in the last three or four weeks, and currently stands at 0.8. Any fluctuation upwards could have serious repercussions.

A Welsh primary teacher commented: "Our basic demand is for a safe return at the appropriate time with social-distancing measures that protect children and teachers. It seems that the Welsh government is also giving in to the pressure for employers to provide a child-minding service to allow their workers to return to work rather than listening to the scientific advice that insists that there should be no return in the current circumstances".

The whole trade union movement should rally around teaching unions to defend their right to keep themselves, their pupils and our communities safe by refusing to return.

The government is also intending to extend the school summer term by a week, cutting the summer holidays in return for an extra week in October half term.

This should be rejected. It discriminates against poorer pupils' families who will find it easier to play outside during the summer while richer families can fly off to sunspots in October.

While correctly criticising the Welsh government's proposals, none of the education unions have said yet that they will fight them. There needs to be a clear united statement by all the unions opposing the return to school on these terms, and a clear lead for teachers to refuse to return, if necessary using Section 44 of the Employment Rights Act 1996 (which gives all workers the legal right to refuse to work in dangerous conditions) in a co-ordinated campaign of action. Teaching unions should organise with parents who are also unhappy with these proposals.

Emergency union meetings should be organised for members to raise their concerns and to plan a campaign of opposition.

Parents organise to scrap the plan

Ross Saunders, a parent of two small children and a Socialist Party member in Cardiff, has set up a campaign group opposing the Welsh government's plan to open all schools in Wales on 29 June.

The group now has over 3,000 members, and is organising an online meeting of parents and a car cavalcade. Ross was interviewed by BBC Wales Today and ITV. Below are extracts from those interviews.

"I was amazed. It seems like one day the Welsh government is saying we should only be mixing with members of one other household and the next day they're saying children from hundreds of other households can all mix together in school.

"Lockdown has been hard. It's hard on parents. It's hard on the kids as well. But we do it because that's what we need to do to keep safe.

"My fear is that all of that hard work we've done in the weeks previously is now going to be thrown away because of one reckless decision by the Welsh government. That's why they've got to scrap the plan".