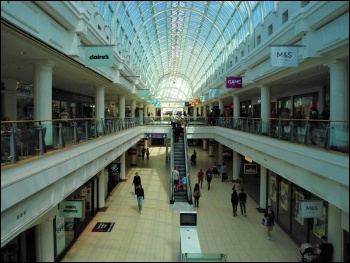 Boris Johnson has announced government plans to relax lockdown further, with a wider opening of non-essential retail on 15 June.

The mood among many workers in retail at this news will understandably be very mixed. There will be those who are keen to get back to work as quickly as possible as they can't afford not to.

Most retail workers will have been inflicted with a 20% pay cut, as the government has only provided 80% of pay through the job retention scheme.

Considering wages in the retail sector are low, with many on minimum wage, coupled with the abundance of zero and low-hours contracts, retail workers will have been hit disproportionately hard during the pandemic.

Likewise, given the ever-growing list of recognised names disappearing from the high street altogether, some will be anxious to get back to work to avoid the risk of a looming redundancy. With the government being pushed to consider plans to buy stakes in some ailing companies, union leaders should fight for companies that have fallen victim to the pandemic to be brought into public ownership to save jobs.

Many will be worried, and rightly so, with new transmissions even in lockdown still totalling 2,000 per day. Already some supermarket bosses have recklessly scrapped policing social-distancing measures, and have quickly moved away from limiting the number of customers in-store, despite the continued lockdown.

Non-essential retail bosses will undoubtedly try to get away with rushing to return to business as usual, as they try to catch up on rent arrears for the last quarter, as well as clawing back lost profits. The Tory government has released plenty of guidance. But guidance is the key word, as none of it is enforceable, leaving things massively open to abuse by bosses.

In a press release on 26 May, Paddy Lillis, general secretary of shopworkers' union Usdaw, said that businesses will "pay little attention to government advice". The union leadership should make it abundantly clear that it will not tolerate unsafe working practices.

Even government guidance has conceded that "no one is obliged to work in an unsafe work environment." Where workers are put at risk, they should organise walkouts under Section 44 of the Employment Rights Act 1996.

As the risks cannot be completely mitigated, workers should demand higher wages and a hazard bonus.

Workers should be encouraged to join a union and challenge unscrupulous employers. Workers and health and safety reps should emphatically insist on conducting risk assessments to guard against corners being cut, and to ensure that safety is put firmly before profits.

They should also consider putting forward reduced opening hours to ensure price changes, restocking, merchandising and stock checks can be done safely. Any non-essential tasking should be scrapped, along with performance targets, until the pandemic has passed.

It has also been reported that the government is considering suspending Sunday trading laws, under the smokescreen of helping key workers to shop. But in reality, it is to try and boost the economy, at the workers' expense. Sunday is the only day of the week that stores cannot be open for 24 hours a day, and shorter working days on Sundays should be defended so that workers have more time with their families and time off.