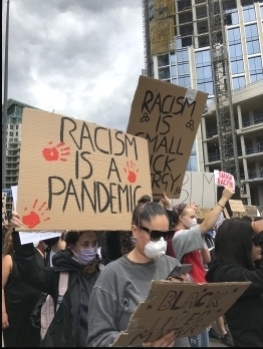 Like all health workers, coronavirus has dominated my life. We've been concerned to see people returning to crowded workplaces, beaches and beauty spots.

But we've also felt the anger over the murder of George Floyd. I had to attend the Black Lives Matter rally in Southampton.

My 'daily walk' was joined by hundreds of young people - not of my household but of my class. Although most of us wore masks, social distancing became impossible.

Discussing with some of my colleagues, feelings were very mixed. The importance of following the rules to save lives was uppermost, "unless you're rich or a friend of Boris Johnson", one commented.

People told stories of being stopped by the police on the way home from the hospital, when white colleagues were left unmolested.

People have lost faith in the government rules, and more are beginning to see the rottenness of the whole capitalism system. People aren't just dying from Covid-19.

The fightback on the streets has started and people's anger is spilling over. We must be there to listen, to discuss and to give a way forward - to fight for socialist ideas against this system.

We need to find ways of doing this safely, with social distancing, and face coverings. But small campaign stalls and leaflets are essential during this period. Opposition to the brutality of capitalism and government failure must be organised openly.