Do you have something to say? Send your news, views and criticism in no more than 150 words to [email protected] or Socialist Inbox, PO Box 1398, Enfield EN1 9GT. We reserve the right to shorten and edit letters. Confidentiality will be respected if requested.

Police violence is start of outrage

A Black Lives Matter spokeswoman said the protests were not just about police violence, although the police violence is an outrage. She said there was the feeling that there was no way out, for a whole generation, from never-ending poverty, discrimination and police violence.

She said the lack of infrastructure in black communities is being compounded by discriminatory and racist policing. She said it was about the lack of jobs, good jobs. The terrible state of education and poor healthcare has disproportionately killed black workers during the Covid-19 pandemic.

This movement could be the spark for a youth movement against capitalism. Boy, do we need it.

So some young people threw a statue of a slave owner in the River Avon. Tory and sadly Labour hypocrisy knows no bounds.

Centuries of desecration and destruction of monuments around the world by British imperialism has gone unpunished. Theft and looting of shrines, sacred places and monuments by individual wealthy expeditioners are lauded in museums.

Before any single person is interviewed for the Bristol drowning, let's bring in the hired thugs - or their inheritors - of British capitalism for their turn in the dock.

They didn't just steal heritage, they stole our wealth too.

When socialists talk about racism as a class issue, we don't mean it's only working-class black people who suffer, or that we need more black representatives in our ruling class.

The basis for which racism exists is to prop up a class-based system, where a tiny minority control the world's wealth while the vast majority suffer.

Inequality began at the dawn of class society. But racism towards specifically black people was a founding principle of our current class society, capitalism.

Built on the backs of slavery, capitalism needs to divide the working class in order to maintain control. Divide and rule.

Pit ordinary people against each other to keep them from uniting and struggling for a better life. Divide and rule are the twin pillars our current global capitalist society stands on.

As a human being I want racism to end. As a socialist, I understand this can only come through a complete overhaul of our current system, by uniting the majority of ordinary people to take power off the hands of the current ruling minority.

Of course, battles would still need to be had under socialism. But it is only on the basis of a society that does not depend on the crushing of the many to sustain an elite few, that racism and all its horrors can be smashed.

I am protesting against police brutality. I will continue to fight as a socialist and a member of the Socialist Party to end racism.

Statue toppling: Others deserve it

"If we start pulling down statues of 'bad' historical figures, where do we stop?" ask incredulous right-wing commentators. Actually I can see their problem.

Slavery was part and parcel of colonialism, imperialism and capitalism. Where would statue toppling stop, indeed?

Queen Victoria's statues are all over the place. She oversaw the British Empire and its many, many crimes.

While on her throne, one million people starved to death in Ireland and another million were forced to emigrate, many dying in the 'coffin ships' to America, to satisfy laissez-faire capitalism.

That's just one million reasons for her statues to come down, along with all the other offensive bloodstained representatives of this system. Best place for them is a 'museum of pre-civilisation' - pre-socialist society, that is.

Black and white, unite and fight

I feel like somebody has had their foot on my neck all my life. I've been smashed down by the capitalist system and it doesn't matter what colour the boss was. Racism is very real, as we have seen in Minneapolis.

In the 1960s, the ruling class realised that they needed to cut across the radicalisation and potentially revolutionary movements in black communities that were reaching out to white and all workers, threatening their entire system.

We had Barack Obama as president. He talked a good game, but didn't achieve much at all for black or any other ordinary working people.

He was too linked to the demands of capitalism, which helped lead to Trump's victory - who now uses racism whenever it suits him.

What we desperately need is working-class unity, to rise up and smash down capitalism and build a world for everyone to live to their best and full height in life with real democracy - socialism. 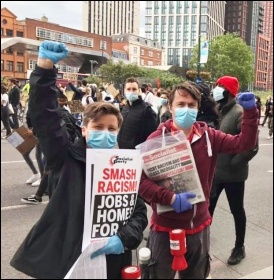 I picked up a copy of your newspaper, the Socialist, at the Black Lives Matter protest in London on 7 June. I was delighted to read a leftist take on issues caused by the coronavirus, especially following all the liberal media dirge.

"Corbyn humiliated" was the headline of a delighted Daily Express. Jeremy Corbyn was one of ten nominees for eight places for the Labour's Party's delegation to the Council of Europe. He didn't get one.

Could there be any clearer confirmation of the analysis in last week's Socialist, (see 'Lessons from the Corbyn experience' and 'Blairite general secretary elected' at socialistparty.org.uk), of the right-wing control of Labour?

Those genuine socialists still in Labour must assess the struggle needed to reverse this situation. Draw out the lessons of why the Socialist Party (formerly Militant) were expelled from Labour, in the past.

Seriously consider the reasoning in the latest issue of Socialism Today.