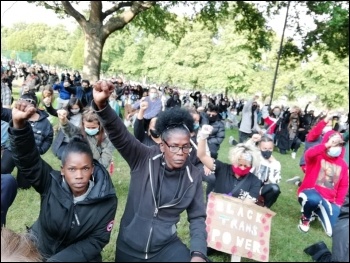 We already know about stop and search and the daily police harassment of black youth. We know all about poverty, unemployment and workplace discrimination; about poor housing and how ten years of Tory cuts, put into practice by councils, including Labour, have destroyed our local services.

We are well aware that black, Asian and minority ethnic people are more likely to die from Covid-19 - and that the Tories haven't even published the recommendations from the recent Public Health England report on BAME deaths!

We also know that the working class - black and white - is being ground down, while the super-rich and the powerful make mega-profits at our expense.

That's exactly why millions of black and white youth have taken to the streets, here and across the globe. A sea of anger against inequality, poverty and injustice - demanding action, not cheap words.

As footballer Marcus Rashford says, this system is not built for working-class people to succeed. This system is capitalism. It uses racism to divide working-class people, so that we don't come together in a united force to fight to end the power, and privilege of the tiny minority that owns and controls the wealth in society created by the rest of us.

That's why we are fighting for a united struggle of workers and youth to organise society on an entirely different foundation. One based on need, not profit and inequality. One where big business and the banks are publicly owned, and society is democratically controlled by working-class people for the benefit of all. That's socialism!