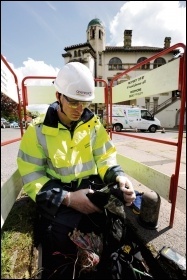 The telecoms executive of the Communication Workers Union (CWU), is recommending a pay increase of 1.5% for 2020. This offer only just about keeps pace with inflation, but BT are stealing three months of this year's pay increase, by only paying it from 1 July, compared to the usual pay date of 1 April. It must be back-dated at the very least.

The union is trying to give the impression that the only alternative to accepting this inadequate offer is taking industrial action, yet no evidence has been presented that more money couldn't be negotiated. In any case, the union's starting point must be whether the offer meets the needs of members and if not, prepare for a serious campaign of industrial action.

The executive's approach sends totally the wrong message to both members and management, at the same time as BT bosses have gone head with the compulsory redundancy of a team member grade employee.

Telecoms engineers, like postal workers, are considered to be essential workers during Covid-19, but BT have offered no recognition of their role in keeping telephone, internet and social media sites operating.

Some engineers have been verbally and physically attacked by members of the public who believed baseless conspiracy theories that Covid-19 was being spread by the telecoms network. Again, no recognition for this.

The union should have demanded that BT's books be opened so BT could prove this, guaranteeing a dividend to small shareholders who could demonstrate financial need. Such an approach would be the basis for the CWU to seriously campaign for BT to be taken back into public ownership.

While it seems likely that this offer will be accepted, CWU telecoms members need to pressure the executive to make up lost ground with next year's pay offer and prepare for a battle with BT management.