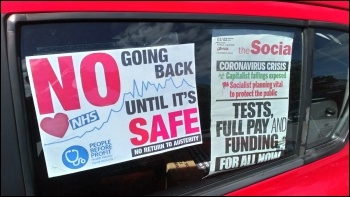 Socialist Party members in Cumbria have been active as teachers and parents in the campaign against the reckless attempt to prematurely reopen schools without safety guarantees. The national u-turn is a victory for all of us and a humiliating defeat for the Tory government.

It shows how powerful workers and the wider working class (in this case, as parents) are when they are given a lead by trade unions - not just the National Education Union but all the unions involved.

But this has also revealed another reality - the baleful role played by some Labour-led councils such as Cumbria county council. It gave no lead in this and gave us no help, instead playing Pontius Pilate - "it's up to the schools."

Through the local media, Unite Community union branded this "an abrogation of responsibility which puts an unfair burden on individual head teachers and their staff".

The Labour councillors didn't even match the Tory-led Lancashire county council and make a clear statement against the government's reckless plan. Instead, they effectively implemented government policy - drive the parents back to work, safely or not - just as they implement Tory cuts every year. Some opposition!

Rejecting public demands from Unite Community to stop the unsafe reopening, on Monday 15 June they declared in the local press: "We would like to reaffirm our commitment" to opening schools. These hapless councillors were doubling down on the government's previous order just as the Tories were abandoning it, leaving them high and dry just two hours later.

Even after the u-turn the council published a statement, again reaffirming that abandoned position, leaving them standing to the right of Boris Johnson.

Teaching activists were dismayed that even the Tories (in their own interests) had taken more notice of the mood of opposition from parents, teachers and their unions than Labour councillors! This has caused disquiet in the Labour Party and criticism of the council leader, but there is no plan to remove him or the other Blairite councillors. With them and Sir Keir Starmer presenting the face of Labour, what chance do they have of enthusing workers to vote in the next council elections?