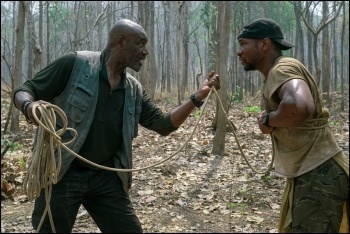 Spike Lee's new film 'Da 5 Bloods', featuring four black American army veterans of the Vietnam War who meet up again in modern-day Ho Chi Minh City, has been released on Netflix just as racism and the class system that ferments it are in the forefront of the minds of millions of people. The film is likely to attract many viewers: Black Lives Matter even gets a brief showing at the film's end.

The movie is foregrounded with footage from the 1960s and 1970s US civil rights and anti-Vietnam War struggles, including excerpts of speeches by Malcolm X and Martin Luther King.

The four 'Bloods' return to Vietnam in search for the body of their fifth soldier comrade, 'Stormin' Norman', who was their charismatic commanding officer and radical inspiration - "our Martin and our Malcolm". They are also seeking to find gold bars they buried after the firefight in which Norman was killed.

Present-day Vietnam is intercut with scenes from their days of combat, with Lee choosing to show the four surviving GIs as the old men they are today, while Norman remains a youthful radicalised GI, fated never to grow old or sell out.

The first part of the movie moves at a leisurely pace as they travel by boat, vehicle and foot to the isolated countryside to locate their quest. The dialogue, however, is fast, often humorous, and sometimes insightful.

Reference is made to how those from an Afro-American and poor background were more likely to be drafted into the US army and to die in Vietnam, while rich white college students were able to avoid the conflict.

The four vets drink in the 'Apocalypse Now' bar - both a reference to the iconic Francis Ford Coppola Vietnam War movie and an ominous indication of what lies ahead of them.

Lee runs several subplots. Paul (played by Delroy Lindo), who suffers from untreated PTSD and guilt over the death of Norman, is volatile, self-loathing and angry. He declares he voted for Trump in 2016 because immigrants were "taking the jobs of black people", but he is roundly taken to task by the others.

Otis (Clarke Peters), the calm organiser of the expedition, meets up again with his former Vietnamese girlfriend, with profound personal consequences. Others in the growing ensemble include David, the son of Paul, who shows up uninvited on a quest to make peace with his semi-estranged father and Hedy, who runs an NGO sweeping the country of landmines, in apparent atonement for her French bourgeois family's inherited fortune from colonial plantations and mining in Vietnam.

Eventually they find the gold. Norman had stipulated that the bullion, which was intended to pay off South Vietnam forces loyal to the US, should be instead invested among the poor black American community, as "reparations". However, the riches bring about rifts among the four Bloods and also with a money-laundering middle man.

Unfortunately, from there the movie mutates into a fairly standard (and implausible) action movie. Any further social and political commentary is difficult to hear above the sound of gunfire.

Lee has shown a tendency to limit himself to regarding politics and history through the prism of race. This is unfortunate as the premise of Da 5 Bloods could have lent itself to a more rigorous examination of racism, war and social class.

The mass movement of black and white working-class and student activists, along with the most radical sections of the labour movement in American and globally, seriously undermined US imperialism, and helped forced withdrawal from Vietnam.

And a striking feature of today's mass protests over the killing of George Floyd is that both black and white youth are joining together on the streets and articulating anti-racism and opposition to the profit system.

Salford Socialist Party: A socialist look at the Vietnam War