Some of the local protests the Socialist Party has taken part in up and down the country. 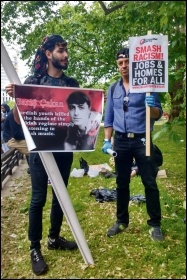 There were around 1,000 across two Black Lives Matter protests in central London on Saturday 20 June, and around 500 on Sunday 21 June.

The Socialist Party's Hugo Pierre, a member of the national executive council of public service union Unison, spoke to the Sunday crowd in a personal capacity. The biggest cheers were when he raised the need to mobilise the whole working class to fight against racism and austerity.

On the Windrush scandal, Hugo mentioned how it was trade unionists who had fought to defend their members from losing their jobs, benefits, and access to healthcare. He blamed capitalism and austerity for the disproportionately high black, Asian and minority ethnic death rates from coronavirus.

Hugo made a call to organise in the trade unions, to link up all the struggles of working-class people. To end, he said we need to fight for jobs and homes for all, for a decent future - and that means fighting for socialism.

The Socialist Party was again well received. We sold lots of copies of the Socialist, and had a large number of people leave their contact details to find out about joining.

We support the call made by many platform speakers to draw together people fighting different oppressions. Unfortunately, none of the speakers talked about the importance of class struggle and fighting capitalism to achieve this. However, the many people who approached our stall enthusiastically agreed with us on this point.

Over 200 at Barra Hall Park in Hayes, Hillingdon. The Socialist newspaper and Socialist Party posters went down well with an enthusiastic young crowd.

A crowd of about 300 came along to the Newcastle protest. A good deal of those who came were veterans of the recent Black Lives Matter protests and receptive to the Socialist Party's ideas. We raised £50 for the fighting fund, including from a lad who liked the look of our Malcom X posters so much he wanted to buy one.

The demo at Pymmes Park in Edmonton, Enfield on 20 June attracted a slightly smaller gathering than the previous week in Enfield Town. Still, there were about 60 people and a lot of home-made banners.

The Socialist Party was the only left organisation to have a campaign stall. One of us was invited to speak, and our message was the clearest in terms of the movement needing a socialist programme to take it forward.

The 20 June protest in Reading was not as huge as the two previous ones, but 17 young people were interested in joining the Socialist Party. One of our new members - recruited on the demo the previous week - came and took part too, selling our material and raising £15.