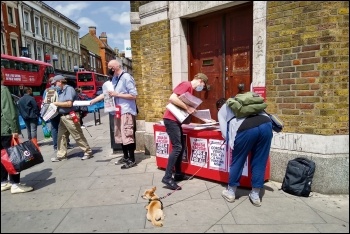 Selling the Socialist in Hackney, 20.6.20, photo by Chris Newby   (Click to enlarge)

Just some of the events where the Socialist newspaper was sold with social distancing in the past week...

A very happy return to campaigning in Walthamstow. Our members were also on the central London demos and some remain shielded. We campaigned on the issue of Black Lives Matter.

There wasn't the usual footfall, lots of people are still not sure about going out. Those who had ventured out to the shops for the first time in months seemed a little anxious and apprehensive having to deal with the new social-distancing measures put in place by the shopping centre staff.

We did use our sound system for those queueing to go into the shops. It was enjoyable being out campaigning, despite being a little nervous at first.

I would encourage people to start going out campaigning, although wear a face mask and latex gloves, and keep some hand sanitiser on the table.

Selling the Socialist in west London for the first time in over three months was great. More people bought a copy of the Socialist than usual.

We were all so happy to be out campaigning again. We were discussing with people about the growing movement against racism, but also the impact of coronavirus.

One person we spoke to worked for British Airways, which is threatening to cut thousands of jobs and reduce pay, terms and conditions.

Lots of people also wanted to discuss housing - Grenfell Tower is in our area. It's a clear example of how capitalism kills too.

Outside the old Stoke Newington post office, the Socialist Party was campaigning on building a movement to smash racism and defend the NHS. People were pleased to see us there.

As we were setting up, members of the public came over, joined in with the conversation, and aired their views and concerns. Some shared their own personal experiences.

People agreed capitalism needs to be stopped in order to see real change. We discussed the Black Lives Matter protests and what the Socialist Party can do.

Others talked about the protests they have been to, or touched on the government's role in why the country is in this state. We discussed how the Black Panthers ran their organisation, and united with other movements and trade unions to show solidarity and apply even more pressure.

We spoke about going out to other local areas in Birmingham. A lot came up on what will be done after the protests die down, and everyone agreed that having more meetings to keep up discussions would definitely help.

Thousands of people have contacted the Socialist Party during lockdown or met us on the anti-racist protests, interested in joining. In Tooting Bec Common there were two brand new members, and another who wanted to find out more, at our park meet-up.

We discussed everything from Black Lives Matter to Jeremy Corbyn to the environment. We have agreed to do regular park discussion groups.