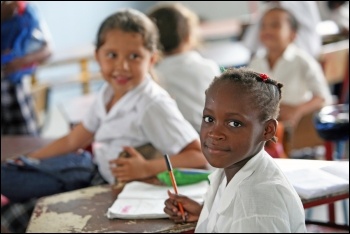 How can the education system improve racial inequality?   (Click to enlarge)

The Black Lives Matter movement has quite correctly posed the question of black history in our schools and public life. It is a question that has been taken up by many teachers. Nationally, 2,000 members of the National Education Union (NEU) attended a Zoom meeting to hear the Reverend Jesse Jackson and Labour MP Diane Abbott speak on the issue of building anti-racist schools.

Later in the same week, 130 NEU members in Haringey met online to share their experiences of trying to change the curriculum in their own schools.

For example, generations of Bristol's black community have had to grow up in the shadow of the legacy of notorious slave trader Edward Colston. Not just with the statue that was torn down during the recent protests, but also with his name on public spaces, housing blocks, and even schools. Yet generations of the community will not have seen the same kind of public celebration of Paul Stephenson and the Bristol Bus Boycott.

In the 1950s, a black youth worker, inspired by the actions of Martin Luther King in Montgomery Alabama, led a boycott in protest at racist employment practices on Bristol's buses. It was an important turning point, but not just for Bristol's black community. It also transformed how the question of racism was taken up in the British trade union movement.

Similar accounts of black history have been white-washed from the national story, and all too often this has been perpetuated in schools. In recent years, Black History Month has been established in schools. But it has become reduced to a tokenistic gesture celebrating the individual achievements of characters largely taken from American history such as Harriet Tubman, Martin Luther King and Mohammed Ali.

For many years, students studied US Civil Rights at GCSE, while remaining uninformed about the role of immigration, empire, and racism in shaping our own society. The national curriculum has ensured that all students will learn about the Atlantic slave trade. However, frequently the emphasis of lessons has been on the horrors of the Middle Passage and the victimhood of enslaved Africans, rather than of their resistance and its role in abolition.

The history of Africa before the Atlantic slave trade receives little or no attention, and the Victorian stereotype of a 'dark continent' is maintained, with no reference to the great civilisations of Africa such as the Kingdom of Ghana, Great Zimbabwe or Songhai.

Historians such as David Olusoga and his popular book and TV series, Black and British: A Forgotten History, have gone some way to address this. Not just in terms of the role of empire, slavery and immigration, but also in telling the previously untold story of the black presence in Britain since Roman times.

In schools, many history teachers have similarly tried to redress the issue of establishing these untold histories in the curriculum. It is not simply a question of 'teaching black history', but of embedding black stories into all history.

For example, the Elizabethan 'Golden Age' is often seen as the start of a glorious period of exploration. But this cannot be separated from the beginning of the slave trade, and the growth of a free black presence in England as a result of trade around the Mediterranean.

Similarly, the Industrial Revolution cannot be understood just in terms of inventions and entrepreneurs, or even when the experiences of the working class are included, without reference to the slave trade and the massive accumulation of capital that made possible Britain's industrial take-off.

However, teachers trying to redress the imbalances of the curriculum are doing so under the constraints of the current education system, and Tory education policies that have actually reversed some gains.

Unlike almost every other country in the world, history has never been a compulsory school subject in Britain. However, the recent 'reform' of GCSE specifications has seen many schools adopt a three-year GCSE curriculum. As a result, many students will now stop studying history at the age of 13. At the same time, citizenship has been removed from schools, so an alternative avenue for exploring these issues has been removed.

At GCSE, the new specification from exam board AQA does offer the opportunity to study a newly created module on 'Empire, Migration and People'. This is an excellent opportunity to explore the issues of black history. However, only just over 50 schools in the country so far have taken up this option, largely because of the austerity-imposed budgets that restrict the buying of new text books and other resources.

And of course, the effect of any attempt to improve how history is taught is severely limited by the growth of academies which are not actually obliged to adhere to the national curriculum.

It goes without saying that the expansion of academies, the adoption of three-year GCSEs, and budget constraints, are all most likely to be found in those areas with the highest level of social disadvantage, and the largest BAME communities.

Any attempt to reform the curriculum must acknowledge the limits imposed by the school system in general, and society as a whole. BAME students may feel empowered when the history of their communities takes its rightful place in the curriculum. But this is largely nullified if schools still exhibit institutional racism in behaviour policies that result in black students being three times more likely to be permanently excluded from school than their white counterparts.

Permanent school exclusion is the single most important determiner of social and economic life outcomes.

The effect of the curriculum is not simply constrained by what happens within the school gates either. No amount of awareness of the wonders of the biggest library in the world at the University of Timbuktu in the 16th century Kingdom of Mali will obliterate the reality that, once school is over, black boys are 40 times more likely to be stopped and searched on the street by police.

In 1971, the Caribbean educator Bernard Coard wrote his ground-breaking pamphlet 'How the West Indian Child Is Made Educationally Subnormal in the British School System: The Scandal of the Black Child in Schools in Britain'. Scandalously, much of the institutional racism that he identified still prevails in our schools, despite some of the progress that has been made in terms of the curriculum in the last 50 years.

In terms of taking up the important issue of black history and culture in our schools, it is important to acknowledge that this is simply not enough. We cannot build anti-racist schools in a racist society. And as Malcom X said, you cannot have capitalism without racism.