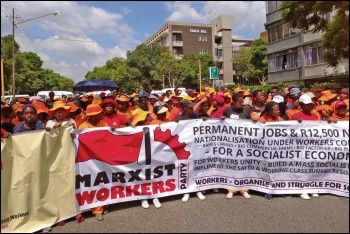 Earlier, on 31 March, the ruling African National Congress (ANC)-run Gauteng Provincial government, and its Department of Infrastructure Development (DID), terminated the contracts of 3,000-plus workers on their Expanded Public Works Programme (EPWP). Gauteng is the economic hub of the country, containing the cities of Johannesburg and Pretoria.

A nationwide programme, the EPWP employs 900,000-plus, as a shadow public sector slave-labour force. It was originally promoted as a 12-month training programme to "impart" skills and training. Even before the Covid-19 pandemic, South Africa had an official conservative unemployment rate of 29%.

The reality is different. The workers who marched were part of a 5,000-strong cohort brought into the DID seven years ago. In that time they received no serious training. Instead, they were loaned out to other government departments and performed essential work.

But EPWP workers are not regarded as workers but 'participants', or even 'volunteers'. This sleight of hand is used to exclude workers from the (limited) protections of labour legislation. This means EPWP workers are denied the national minimum wage of R3,500 a month (£153). Instead, they are paid a 'stipend' of just R2,000 (£93).

In the townships, corrupt ANC councillors use the EPWP to bolster their patronage networks. They agree to find placements for the unemployed on the understanding that they will campaign for them door-to-door in elections.

In collusion, ANC-affiliated trade unions have refused to organise EPWP workers, just as they refuse to organise outsourced and contract workers in the public sector.

There is enormous pressure on South Africa's public finances due to its stagnant capitalist economy (which never recovered from the 2007-09 world economic crisis), massive looting of public money by corrupt politicians, and widespread tax-dodging by big business and multinationals.

Trying to manage this situation, for years, an unofficial public sector recruitment freeze was in place. In February, the ANC government announced its intention to tear up the three-year wage deal struck with public sector unions, refusing to pay the final year salary increase.

In these conditions, the EPWP programme is a valuable sticking plaster for the ruling class, used to try and mitigate the disastrous impact of its policies on public services. Workers understand this, referring to it as the 'Exploitative Public Works Programme'.

The Marxist Workers Party (MWP - CWI South Africa) has played an important role in supporting the EPWP workers struggle. The Provincial Coordinator of the Forum, Executive Mukwevho, is a leading member of the MWP.

Central to the campaign's strategy is building a broader working-class alliance. Agreeing to unite the campaigns, in February, the EPWP Forum and public sector union Nupsaw led two days of protest in Pretoria.

But the DID dug its heels in. It was determined to defeat the workers. On 9 and 10 March, workers mobilised again and organised a sleepover at the DID's Johannesburg HQ. As a result of the massive disruption, the protest caused the management to make a concession, and agreed to negotiations on workers' demands.

However, the Covid-19 pandemic and subsequent lockdown came as a saviour to the DID and ANC Gauteng Provincial government. Despite the televised promises of ANC president Cyril Ramaphosa that no worker should lose their job as a result of the health crisis, ANC politicians cynically used the crisis to push the remaining - and increasingly troublesome - 3,000-plus EPWP workers out the door.

This cruel move left the workers and their families in poverty. Despite the EPWP workers' weakened position, they are determined to continue their campaign for permanent jobs.

The ANC government's attack on public sector pay poses the need for a public sector general strike. This must unite all public sector workers irrespective of union or federation affiliation. A mass movement of the working class, uniting workers and unemployed, is the only way to stop the deepening of the social disaster in South Africa.

The Gauteng EPWP Forum also supports the MWP's call to the Saftu union federation to reconvene the working-class summit to implement the resolution adopted at its first meeting in 2018 - ie to establish a mass workers' party on a socialist programme.